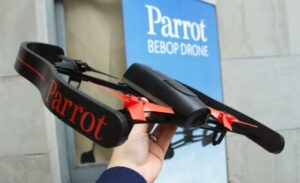 French drone maker Parrot has announced a new drone will be buzzing through the skies by the end of the year. The new model called Bebop will sport a 14 megapixel HD video camera, 8GB of flash memory, built-in GPS, Oculus Rift support, and more.

Like their other models, Bebop can be controlled with a smartphone or tablet running iOS or Android and view video in real time as the device flies overhead. And their new Skycontroller that you can mount your tablet to extends the Wi-Fi range of the drone to 2 kilometers (1.25 miles). You can also attach the Skycontroller to a TV, monitor, or any other display device as well to view the video feed.

Bebop will also be compatible with the Oculus Rift VR goggles in order to control the drone’s camera.

Bebop will weigh less than a pound and is chock full of sensors including an accelerometer, a gyroscope, and a magnetometer. The company claims that the GPS feature will allow the unit to fly itself home if necessary.

No price has been set for the new drone but it is expected to be a bit more expensive than its older brother the AR.Drone 2.0 quadcopter, which sells for $300.

I want one. You want one. Every kid in the world (and most adults) want one.

Trouble is, the FAA is going nuts these days trying to figure out how to regulate these little buggers. Already there have been a few reports of near misses with commercial airliners. There have also been stories about drug dealers using them to locate pot growers using infrared cameras mounted on drones so that they can steal the drugs or blackmail the growers. I imagine there have been reports of people trying to get naughty videos of sunbathers. And I’m sure that the FAA is going to play the ‘terrorism’ card at some time or another as an excuse for implementing excessive regulations.