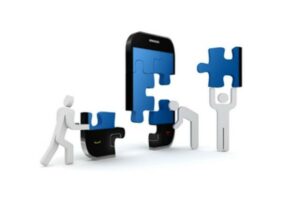 It should be painfully obvious to everyone by now that in order to survive these days companies need to have some sort of mobile presence. The question is how do you go about developing products for mobile? Do you try to modify an existing web-based product or should you start from scratch? A panel of experts recently provided some insights into the mobile first versus mobile only debate.

Last December Burnside Digital, Engine Yard and Junto Box Films teamed up to host a discussion panel focused on the mobile first versus mobile only approaches to development. Despite the unusually chilly weather on that Los Angeles night, the turnout was quite impressive indicating that the topic was definitely something that people wanted to learn about.

The panel consisted of four experts in the mobile development space;

• Josh Brooks, founder and CEO of On The Run Tech

Recently, however there has been a growing trend toward a third alternative called the ‘mobile only’ approach, where stand-alone mobile applications are developed with the idea that they are specifically built for mobile devices only, and not intended to scale up to desktop Web users.

Taking a mobile only approach allows developers to work around or completely avoid mobile device constraints such as lack of an accurate pointing device or keyboard, limited screen real estate, download latency, etc. and, in some cases, taking advantage of the unique built-in capabilities of most mobile devices such as GPS, camera input, gyroscopes, barometers, proximity sensors, magnetometers, accelerometers, voice recognition and other features not normally found on typical desktop devices.

However, mobile first and mobile only are not the only choices available. During the panel Josh Brooks, the quintessential mobile only entrepreneur, did say that, in hindsight, he wished he had developed a desktop web-based application in parallel with the ones he built for iOS, Android, and Windows Phone. In fact, for a company like Junto Box, where quality and vision go hand in hand for its creative community, Rachael McLean felt that mobile was not going to be effective enough.

Sam Friedman of ParkMe sees in-car as being the dominant mobile form factor for his business. Frequency has developed apps for Internet enabled TVs. Each of the panelists felt that you had to commit to iOS and Android, but that you couldn’t dismiss or deny web-based applications or support.

The panel discussion was moderated by Omid Rahmat, president of Burnside Digital and he put together a blog discussing some of the key points that came out of the event. You can read his blog post here.

You can also listen to the full panel discussion on SoundCloud here.