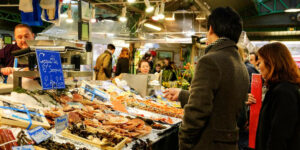 So your suitcase is laid out on your bed ready to be packed for your latest overseas adventure, but aside from your passport, what is the most important item to take with you? Well a change of underwear sure will help, but no vacation is going to run smoothly without one thing – money.

But in the same way that every destination has its own cultural quirks and oddities, no two countries are alike when it comes to dealing with money, which is why it’s worth keeping in mind these four travel money hacks for some of the world’s most popular destinations.

If you’re flying to Japan, a bowl of Ramen or another culinary delight will be high on your to-do list. But if you head out to a restaurant or bar at night, you won’t want to get caught short by a lack of cash, but that’s a real possibly if you don’t plan ahead.

That’s because Japan is still a relatively cash-driven country, and combined with the fact that Japanese bank ATMs are often unavailable outside of regular banking hours (9am-5pm), you could easily be stuck without a way to withdraw cash – potentially hampering your dinner plans!

Always keep some backup Yen on you just in case, or if you’re happy to stick to ATMs while travelling in Japan, just make sure you watch out for any ATM fees you’re charged on your credit card or debit card.

India – Stash a stack of USD

Like many countries, it won’t hurt to bring along some US Dollars to India. Not only is the USD highly valued, it can also be easily exchanged for Indian Rupees. But bear in mind that it will go a long way, so stick to smaller denomination bills and leave your $100 bills at home.

Don’t make the mistake of exchanging too much USD – or any other currency – into Rupees though, as it can be notoriously difficult to exchange it back.

And if you do decide to chance your arm at bartering, keep to smaller denomination notes, because if you rock up with a bundle of rupees vendors will be less inclined to haggle hard with you.

If you’re on a backpacking trip through South-East Asia, you may be severely lacking in clean clothes. But if you make a stop in Vietnam, make sure your bank notes are in pristine condition.

That’s because damaged or dirty notes can be rejected by vendors and shopkeepers in Vietnam, and if you try to exchange that money at a bank, you may have to pay a fee to replace it.

And like many countries, exchanging cash at a bank or airport may leave you feeling short-changed, so it’s worthwhile trying a jewellery shop or smaller vendor to grab a better deal.

Europe – Don’t rely on the Euro

Travelling around Europe is a piece of cake when it comes to hopping from one country to the next, but the same can’t be said for navigating the different currencies on the continent.

Countries like France, Germany, Italy and Spain do make things simpler with the common Euro currency, but popular destinations such as the United Kingdom, Iceland, Sweden and Switzerland are just some of the European nations that have currencies of their own.

To prevent you having to drag around a suitcase full of different currencies, it could be worth bringing along a debit or credit card with low international transaction fees to reduce the amount of Euros or other currencies you need.

5 Surprising Ways Your Smartphone Makes You a Better Human Being