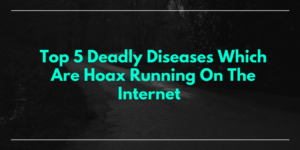 Internet has changed the way we look at things; it has become our daily source of news and other information.

The generation is that dependent on the internet that they go online straightaway if they have to collect information on some new happening or facts related to a particular thing.

In short, everything that comes on the internet is believed to be a true source of information.

Hoax, conspiracy and fake information to generate user’s attention and rage traffic, as a result people get wrong information and start panicking.

This happens especially in the field of health related information where users are misguided about consequences and its causes.

We are going to cover a topic in the same domain. Here are the top 5 deadly diseases which are a hoax running on the internet.

1) Blue Waffle Disease – According to a report by Mavucure, they stated that this is not a real disease. Whereas some of the sites have mentioned it as one of the most dangerous disease which can be transmitted and affects only women.

One of the common symptoms of the Blue Waffle disease is said to be swelling, itching and bleeding. It also transforms the vagina into blue colour.

2) Adrenal Fatigue- Another disease that happens to be in people with low immunity. Second most viral known disease that is a hoax on the internet.

The word fatigue entails the word scare in most of us. The disease generally happens due to adrenal gland unable to produce hormones that helps in relaxation of the body.

There is no official saying on the disease and its said be a hoax by doctors. This kind of hoax has also resulted in people taking more of hormonal supplements and hence, lowering their level of immunity.

3) Lamprey Disease – It has been said that one’s fingertips becomes similar to the mouth of lamprey fish and is said to be one of the scariest hoax on the internet related to diseases.

In the age of advanced technology, it has helped website owners to photoshop few images to be put as testimonials and lure audiences to read their further guide on how to save themselves from the disease.

It has also been said that it can damage soles of your feet and eyes, but according to some of the renowned medical officials there are no symptoms and causes of disease like this.

4) Electromagnetic Hypersensitivity – The name itself is humongous and the hoax created around it can be said the same. We have heard a lot about consequences of using electronic devices for a long period of time but this disease that is said to happen due to microwave radiations such as ‘Death Rays’ has been rumored to cause severe diseases such as cancer.

And this form of cancer is known as EHS (Electromagnetic Hypersensitivity). Though, doctors say that a person who is receiving electronic waves hasn’t been in a medical complication of EHS.

5) Trypophobia – Haven’t we learnt about the word phobia from the internet where every other website has a different form of phobia? All of that is said to be hoax.

Someone has rightly said that a person can have a different form of phobia by just reading on the internet.

One good example is websites listing Trypophobia as one of the dangerous disease. Even though, some of the disease listed above have a cure but Trypophobia is said to have no cure to the disease.

Irregular reactions due to nervous vibrations leads to disorders in the body and is so called ‘Trypophobia’ Evolution of the brain and pessimism are the main causes of the disease.

As we have seen the warnings and advices from different top notch medical professionals, one can only say that whatever you read on the internet shall be verified in person especially for information regarding health.

There are some conspiracy sites who are constantly prepared to elevate these deception articles to get consideration. Be keen and keep open your feeling of intelligence before bouncing into them indiscriminately.

Get Well Soon Gift Ideas for Someone in Hospital