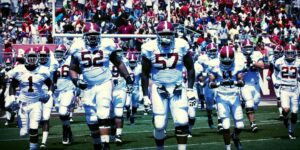 Are you wondering what it takes for an ambitious, young American football player to get to the National Football League (NFL)? In order to become a professional football player in the NFL, there are many skills that a player has to hone before he can go to the next level, and there are various academic requirements that have to be met, as well.

To play football in the NFL, you need to be strong and fast, and players coming out of high school are not in good enough physical condition to play against professionals. Just as recently drafted ice hockey players play in the AHL in order to prepare to play in the NHL, this American college football league gives young football players time to develop so that if they get drafted, they will be ready physically to play. That is the main reason why a football player wanting to go pro will elect to play American college football.

According to Chron, the requirements set by the NFL and NCAA are almost the same as those set by university admissions boards. The NFL does not recruit players without a high school diploma, but they do not require players to have a college degree. Many players are recruited during the junior year of university before they complete their degrees.

NCAA requires football players, as well as all other student athletes, to be academically eligible to play sports. To be eligible as an incoming freshman to play Division I or II football, you must be a high school graduate. To remain eligible to play football, the player has to maintain a 2.0 GPA and successfully pass all of his courses. On top of that, you have to attain an acceptable ATC or SAT score in order to play American college football, or any other college sport governed by the NCAA.

It is worth noting that the NCAA is dedicated to promoting education, and they will help athletes to obtain a degree even as they are playing every Saturday and practicing multiple times a day. Nevertheless, they are required to abide by NCAA rules, and the rules of their university, if they want to play college football. If a student athlete fails to meet the academic expectations of the NCAA or the university, he or she will no longer be allowed to play.

Why study for a degree if you want to be a pro football player?

A degree from a college or university is almost a basic need for the average American citizen. Even if you aim to become a pro in the NFL, you need an education just in case you are not drafted. Furthermore, the average NFL contract is three years, and many players do not get re-signed.

Even Jason White, the Heisman winning quarterback of the Oklahoma Sooners, did not have a successful career in the NFL. However, having pursued his education, he had something to fall back on when his NFL career bottomed out. He now owns Jason White Companies, and is also a board member of a hospital.

As you can see, earning a degree can help a football player start a new life if he is not drafted or does not have a successful professional career. Players might want to focus on the football part of college, but it is much better, in the long run, if they finish their degree.

As a college graduate, you have many opportunities, including, but not limited to, freelance writing. With your expert knowledge, you can use this essay writing service and start making money doing research and writing thesis papers for students who are getting the same degree you earned in college.

With the experience players gained playing American college football, they can often become coaches in high school, college, or even in the NFL. Many college graduates in the US who did not make it to the NFL are making good money in schools across the country as coaches.

Many people believe that those wanting to play professional football should not have to go to college in order to get to the NFL; however, as you can see, there are many benefits to being a student athlete.