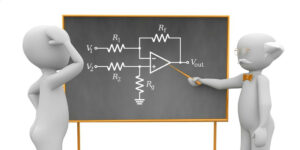 For anyone working with in signal processing circuits, control circuits, and instrumentation, operational amplifiers, also known as op-amps, are probably the most common circuit devices you will encounter.  Op-amps are the most widely used analog integrated circuits and can be found in the widest variety of electronic circuits.

In fact, op-amps are so common that they are sometimes taken for granted, with designers and electrical engineers overlooking the intricacies of the op-amps they are using. But they shouldn’t be, since they are so important to so many aspects of electrical circuits. Op-amps are vital to digital signal conversion, as they amplify the sometimes infinitesimal signals from sensors so that analog-to-digital converters can turn them into digital signals. They also make filters more effective, providing more power than the filters that are only built from coils and capacitors.

But what is an op-amp, really? What can it do?

A Simple Explanation of Op-Amps

Operational amplifiers, are one of the most common, and useful, components in analog circuitry. Because they have all of the properties required for nearly ideal DC amplification, they are highly useful for signal conditioning, filtering, and performing mathematical operations.

In the simplest terms, an op-amp is a device for amplifying voltage. They are used in audio, video, and high- and low-power applications. When combined with external feedback components like resistors and capacitors between its output and input terminals, the amplifier can perform multiple different operations. Those operations are determined by the feedback components; the combined function of the amplifier and the external components create different feedback configurations (resistive, capacitive, or both).

The majority of op-amps function using negative feedback; in other words, the output is fed back through the inverting input through an impediment. Some op-amps use positive feedback, and take a fraction of the output signal back to the non-inverting input, while an even smaller percentage of op-amps use both positive and negative feedback around the same amplifier. That being said, the performance characteristics of op-amps are generally optimized for specific applications via an emphasis on different performance characteristics.

Most op-amps have three terminals: The inverting input (marked with a negative or “minus” sign, the non-inverting input (marked with a positive or “plus” sign) and the output port, which has the capability to sink and source either a voltage or a current. Typically, op-amps are linear operational amplifiers, meaning that the output signal is the amplification factor, or the equivalent to the amplifier’s gain multiplied by the value of the input signal. Depending what type of signals are being input or output, the gain can fall into one of four different categories:

Op-amps are so common because they can be used in such a wide variety of applications. Some of the most common include:

These are just a few of the applications of these versatile components. No matter how they are used, though, their importance cannot be understated. Whether you are building a simple circuit to power your own design, or developing the latest Internet of Things device, understanding the role that op-amps play and using them to your advantage can ensure your device works as it should and provides the best user experience.

Is it Time to Adjust Your Lead Nurturing Strategy?

What It Means to be a Responsible Internet User: Social Media Etiquette