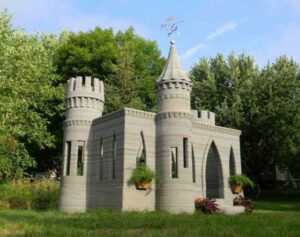 Andrey Rudenko of Minnesota used a custom-built, cement-spraying 3D printer to print a small castle in his backyard.

There have been some interesting objects created by 3D printers but most of them are only a few inches tall and, to be honest, not very practical. Bobble head toys, plastic jewelry, little sculptures and decorative lampshades are all well and good but you could buy most of these items at Wallmart for less that it would cost to print them on your 3D printer.

Now the guy who was using his printer to make a custom fit prosthetic hand for a little girl born with only a thumb, good for him. Or the person making false noses and ears for plastic surgeons to use when repairing people’s faces, again, good for them. 3D printed food is another one of those, ‘oh that’s kind of fun, but…’ applications.

And of course we’ve all heard the stories about printing the components of a gun, but I wouldn’t want to be the one pulling the trigger (and the fact that you would have to spend thousands of dollars for the printer in the first place makes it another ‘why bother?’ kind of thing).

But to trick out a 3D printer to squirt cement instead of plastic and then use it to build a castle – now that’s clever.

According to reports, Mr. Rudenko said the castle was just a test run. For his next project he intends to print an entire two-story house, complete with insulation, stairs and a roof. I wish him all the best.

I can imagine this leading to a day when you select a blueprint for a house (or design your own) and a company shows up with a big truck, sets up the printer and pushes a button. A day or two later you’ve got your new home nearly ready to move in. Right now stuff like windows, doors, plumbing and electrical wiring wouldn’t be possible with a cement-squirting 3D printer but I have heard of printers that can use special dyes that harden under ultraviolet light that can be used to print circuit boards, so who knows?

And judging by some of the shoddy construction I’ve seen in many homes, I’d probably feel safer living in a house that was built by a machine to an exacting specification rather than one built by a bunch of guys off the street who can’t drive a nail straight.

So a tip of the hat to Mr. Rudenko for printing a castle in his backyard.