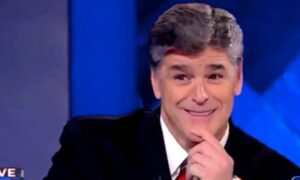 There is a campaign to finance billboards across Los Angeles, New York and Chicago airports to “show world what idiocracy looks like.”

Well, this should be fun. A campaign by Sean Fahey, a movie writer and director, to post billboards at three major US airports proclaiming “Sean Hannity is an idiot” is taking donations at StartJoin.

Recently, comedian Russell Brand wrote an opinion piece in the UK’s Guardian newspaper accusing the Fox new anchor of using terrorist tactics to grill a Palestinian guest on his show, there to debate the Israel-Gaza situation.

Well, Mr. Fahey has gone and one upped Brand and says, “Sean Hannity has an honorary degree because he is a mental failure.”

His plan is very simple, he will post Sean Hannity is an idiot billboards at LAX, JFK and ORD airports, three of the busiest airports in the world, and will include an image of Hannity so that everyone can “understand that this fool is not to be taken seriously.”

Each billboard will cost about $7,000 and Fahey thinks about one month is a good start for the length of time each is on display. If the funding targets of the campaign are not met then Fahey promises to make sure billboards are placed in at least one of the three airports and somewhere in each of the three cities he is targeting.

Please don’t troll us, we don’t care either way about any of the characters in this story but just like to see big posters calling out someone for being an idiot.

Our devices want too much attention