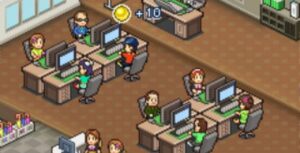 “Developers don’t get business savvy enough,” says Colin Macdonald, games commissioner of Channel 4. “It’s a competitive market and you need to know how to make your voice shout louder than the rest.”

He’s right of course. The games industry has seen explosive growth in recent years – but its unbridled diversity means that now more than ever it’s hard to know exactly how to make it big.

Crossed wires of communication and advice mean that developers often don’t know where to start in marketing their game, and rely too much on just a great idea to push through the scrum of other companies clamouring to make themselves heard.

The bottom line is that, sadly, having what you consider a top-notch idea is not enough. Macdonald advises developers to “create a great game, but don’t do it at the expense of creating a sustainable business. Universities are doing a fantastic job at nurturing the creative and programming skills of young developers, but they’re leaving education with no real sense of how to make money from those skills.”

In a sense then, Macdonald doesn’t believe there’s a “digital skills gap” in the gaming industry so much as an enterprise skills shortage.

“Around 2008 / 2009 was a tough time for the industry,” Macdonald recalls. “PC was shifting, online was changing, the industry was moving away from subscriptions and mobile gaming was on the rise. Then the recession hit.”

As a result, publishers became reluctant to place bets on risky Indie studios and young companies found it difficult to find investment. Five years later, the economy is on the up and now more than ever gamers are crying out for the next big thing – so how can you persuade the people with the cash to part with it?

At a workshop run by IC Tomorrow, one of the founding Fathers of the games industry answered exactly that question. Having started Games Workshop in 1975 and chaired Eidos through its halcyon Tomb Raider days from 1995-2002, Ian Livingstone knows better than anyone the precise ingredients that make up a recipe for success.

The problem, says Livingstone, is that the games industry has “always been labelled, as have all creative industries, as a fluffy industry. We don’t have any real value, we’re intangible, we don’t have massive buildings where people run around in hard hats, ours is an ethereal process, you don’t see anything that we’ve done until we’re almost ready for launch. So how do we persuade people to invest?” Or, more pertinently, how do you secure success?

It all comes down to the “Five P’s.” These are:

Profile – Making yourself known in the media and gaming community

Intellectual Property – As Livingstone says, “we’re pretty good at protecting it with copyright laws, now let’s make sure we hang on to it rather than trading it away.”

Pounds – Simply put, getting the investment community to invest in and understand good ideas

Do all these things, and Livingstone says you’re well on track to success. They’re important lessons to learn, and ones that are rarely taught. As Macdonald tells us, “I think gaming as a whole is still misunderstood as something teenage boys do in their underpants on a lazy Sunday afternoon. I’ve been in the industry for over twenty years, and I think my parents still don’t fully understand what I do, and probably will be doing for the rest of my life.”