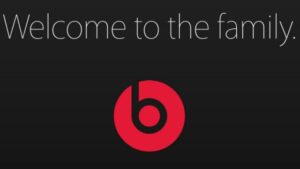 In May of this year, Apple offered to buy Beats for $3 billion with only $400 million of being stock instead of cash. It is believed that the stock payout was made to Beats shareholder, Vivendi.

Beats Electronics is the maker of Beats’ headphone, which Apple promises to take to the next level and “reimagine sound once again” just like the iPod did in its day.

Beats has a trademark application under IBEATS filed April 25, 2014, and claims to have patented software for its BeatsAudio brand. There’s not much to go on with either.

Beats Music, on the other hand, is an on-demand subscription based streaming music service. Beats Music was $500 million of the purchase price of the total deal.  So, while it is a small part of the total purchase price, Beats Music is believed to be the real reason Apple wanted to pay so much for both businesses (they operate under the moniker of Beats Electronics LLC).

Beats Music is the result of Beats acquiring a company called MOG in 2012. MOG has two patents that deal with dynamic control of song frequency in playlist through a music service, and meta-data sharing of existing media through social networking. While neither is significant in impact in the streaming music subscriber business, they’re better than nothing.

So, expensive headphones, a billion dollar market doesn’t sound like the big bang Apple would expect, but it could be accretive to its mobile brands.

Streaming music services doesn’t sound that great either because, with little in the way of technology and only 200,000 users, Beats Music seems to be a little behind the competition from Spotify and Pandora.

The other notion here is that Apple is acqui-hiring Iovine and Dr. Dre giving it an immediate boost in creative talent, which it is sorely lacking in its businesses. Technology and design, yes, but creative, no.

There is also the notion that Beats gives Apple a pivot from which it can start to build out its audio products to be seen as having superior audio quality, something that Iovine and Dre have managed to do quite easily and with little in the way of proprietary technology and manufacturing.

So, $3 billion is the value three brands, Beats, Iovine and Dr. Dre. A billion each? Maybe it is not that bad a deal but it is hard to see if that $3 billion will give any returns to Apple in the short term because, the bar is set so high.

On the other hand, considering that Beats has built a billion dollar business on the back of superior branding and the notion of superior quality it isn’t hard to imagine it doing amazing things with Apple’s muscle, audience, and channels in front of it.

2015: the year your Hilton room key is your mobile

The Internet of Things: increasing the security nightmare