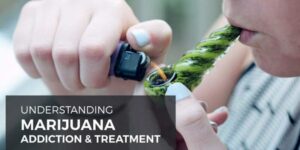 There are a lot of similarities between marijuana use disorder and other substance use disorders. Adults who have come out to receive treatment for marijuana use disorder have used the substance nearly every day for more than 10 years. This is true despite various failed efforts to try and quit. Adolescents also suffer from other psychiatric disorders and may also be addicted to other substances such as cocaine or alcohol. Studies indicate that in order to effectively treat the mental health disorder, there need to be standard treatments which involve medication and behavioral therapies. The best marijuana addiction treatment centers will help a person reduce his marijuana use even if they have severe chronic mental disorders. The following treatments have proved to be effective:

The FDA has currently not approved any medication specifically for the treatment of marijuana use disorder but there is still active research in this area. Since sleep problems are the main feature in marijuana withdrawals, some studies are looking into the effectiveness of medications that can aid an addict to be able to sleep. Medications that have shown promise in this area in small clinical trials are Zolpidem, Buspirone which is an anti-anxiety drug, and gabapentin which is an anti-epileptic drug.

Marijuana is a popular psychoactive drug and it has been declared legal by some states. However, the federal government has still outlawed its use for most purposes. There are some cultures which use it for religious purposes while others use it for medicinal purposes. The greatest arguably use is for recreational purposes. Those looking to overcome addiction seek marijuana addiction treatment in order to stop depending on the substance. The drug can invoke similar reactions seen in stimulants, hallucinogens, and depressants.

Signs of marijuana addiction or abuse include poor judgment, errors in perception and loss of coordination of memory. When the levels of the drug are reduced in a person’s system, he may exhibit side effects such as:

Marijuana use seems to be more prevalent amongst youths and they may take the substance on a daily basis. Daily users report addiction rates of 25% to 50%. The NIDA reports that 16.7 million Americans over the age of 12 have used the drug at least once in a month and up to 42% of high school seniors have admitted to using the drug in their lifetimes.

Chronic marijuana use may be an indication of an underlying problem such as mental illness. It has also been linked to schizophrenia and other related disorders. The drug is also responsible for triggering the onset of relapse of those who are affected by the mental illness.

Detox centers allow those struggling with marijuana addiction find a place where they can safely deal with the side effects of withdrawals while being supervised by a medical professional. Marijuana’s effects are usually short-lived and the effects will vary depending on the duration in which a person was involved in abuse and the amount of THC that has been ingested.

Inpatient rehab centers provide detoxification programs but there is more. These classes can help a recovering addict learn practical new skills on how to apply himself to gaining employment when they complete the program. The skills gained during this period will motivate an addict break free from the drug culture that may have led to the marijuana use in the first place. Cognitive behavioral therapies are conducted in group settings and even after completion of the program, many sufferers will still come together to create support groups for emotional support.

Outpatient rehab allows a recovering addict goes back to his or her family once the detoxification program is complete. More intensive treatment programs may require periodic follow-up appointments or mandatory attendance of a specified group therapy sessions that are held in the center. Drug testing may also be incorporated into the program to monitor patients so that they do not fall back easily into the habit.

Strong support groups will make the difference between a successful marijuana treatment and an unsuccessful one. It is important for those recovering to be surrounded by those who truly understand the struggle that people go through. However, those who do not wish to join such groups may also find additional counseling more beneficial.

Although sober living may prove to be difficult during the first few days the lessons learned during the rehab process should provide an individual with the right tools in order to escape the drug culture the led to the substance abuse. Aftercare services may include voluntary or mandatory drug testing. This is part of the ongoing recovery program.

Marijuana addiction is a serious problem for users. Those who feel that they are addicted or who know someone struggling with addiction should seek assistance in order to find help to overcome dependence on the substance. Friends and families an prove to be supportive individuals and help a person start in the path towards recovery. It is never too late to seek treatment and there are various resources available to help a person fully recover.

7 Ways to Purify/Filter Your Water When Camping