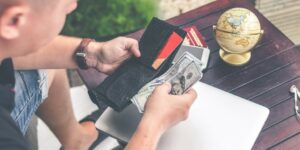 In a society that’s always advancing, it’s quite difficult to assume just what the word ‘smart’ will pop-up in front of next. After all, 12 years ago, I doubt anyone thought we’d essentially live our lives from a Smartphone – something the majority of us can’t live without today.

One thing that is becoming more ‘smart’ is the regular old bank card, with the smart card slowly but surely creeping into our lives more and more by the day. Many companies now offer these cards, such as Ocean Finance, which are designed to make our lives much, much easier.

With several regions and countries, particularly Japan, China, Europe, and Australia all leading in the adoption of the technology, and with North America continuing to adopt it; it’s estimated that 84.9% of the market will be held by smartcards by 2026.

But, what exactly is a Smartcard? Well, let us break it down for you below, and answer some other questions along the way.

What is a Smartcard?

Resembling a credit card in both shape and size, it’s what’s inside a smartcard that makes it different. Firstly, it’s not just a piece of card, it actually has an inside that contains an embedded microprocessor, which ultimately replaces the magnetic strip on a credit or debit card.

Although there isn’t much difference in what the card does, such as allowing you to purchase goods and services, it’s the inside that makes the difference. The key element is that of security. While a strip can be easily read, written, deleted or changed, which makes it a less reliable place for sensitive information, this isn’t the case with the smartcard.

With a smartcard, a computer and card reader talk to the microprocessor, where it then allows access to the data, in order to access the card’s information.

What are the Most Common Applications?

Just like all types of equipment, there are different types of smartcard applications that you can use. These include:

Why is America only just Catching up?

The reason why it’s taken North America longer to adopt the system is because they had online mainframe-based networks, which helped them keep the information stored on a strip safe. These types of safeguards weren’t present in Europe, which is why Europe adopted the system of smartcards sooner than those across the pond.

So, if you’re thinking you’re a bit behind the times, maybe it’s time to invest in a smartcard sooner rather than later.

How To Leverage Learning Management Systems For Effective Employee Training