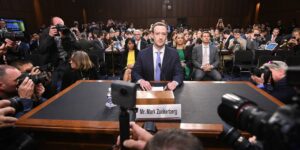 The last question was asked at the hands of Congress on the 11th of April, fast forward three weeks and Mark Zuckerberg may find himself answering more questions, just from a different government official but more interestingly, on a different topic.

Damian Collins, chairman of the Digital, Culture, Media and Sport Committee, said Facebook Chief Technology Officer Mr Schroepfer failed to answer 40 questions put to him as part of an investigation into fake news, which later developed into a wider discussion on political advertising.

The committee’s investigation was prompted over concerns about fake news and the role Facebook plays in its dissemination, particularly with the 2019 local elections in mind.

“Mark Zuckerberg’s right-hand man, whom we were assured could represent his views, today failed to answer many specific and detailed questions about Facebook’s business practices,” said committee chair Damian Collins.

“We will be asking him to respond in writing to the committee on these points; however, we are mindful that it took a global reputational crisis and three months for the company to follow up on questions we put to them in Washington DC on 8 February.”

The chairman clarified the consequences of not responding promptly; “formal summons for him to appear when he is next in the UK”.

“There are over 40 million Facebook users in the UK and they deserve to hear answers from Mark Zuckerberg about the company he created and whether it is able to keep its users’ data safe.”

Lately Facebook seems to be staggering from crisis to crisis, with the potential threat of being summed to UK parliament following fast on the heels of the Congress grilling over the Cambridge Analytica scandal.

Despite the problems piling up for the worlds biggest social network, a new earnings report shows that advertisers are not being put off handing over their cash, with a near 50% increase in revenue.

This news is likely to add to Mark Zuckerberg’s vast fortune, a fortune that shows the huge divide between Facebook’s owner and the common man, who’s data serves as the foundation that Zuckerberg’s empire is built on.

According to an online calculator created by Solution Loans, last year Zuckerberg earned £24,424,658 a day, that’s a monthly pay packet of over £712 million. The latest sales figures may boost Facebook’s share value and therefore his 2018 earnings.

Only time will reveal where the tipping point is for companies who advertise on Facebook, between getting sales and the exploitation of people’s data.

Getting Down to Bitcoin Basics: What It is and Where to Buy It

What is DNS and how does it work?