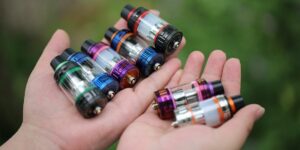 Taking advantage of strategies that tobacco can no longer use

There was a point time where tobacco ads were everywhere; magazines, TV, and newspapers all carried advertisements from tobacco companies, promising that smoking cigarettes was going to make a person cool, or macho, or masculine.

Vaping current faces no restrictions on its advertising, so it can reach out to new customers in ways that tobacco companies are no longer able to do.

One major difference from vaping and tobacco is vaping’s ability to incorporate child friendly flavors, like peanut butter cup or candy apple, into its offerings. Tobacco was long since forbidden from marketing to children, so products like candy cigarettes and flavored cigarettes beyond menthol have disappeared from the market.

While the FDA did claim the ability to start regulating vaping products and e-cigarettes in 2016, not much has come of this yet. And while vaping products cannot be sold to minors, minors regularly access both tobacco and vaping products through various means. The appealing flavors may making vaping more intriguing to teens than cigarettes, and some kids don’t realize the products they’re vaping contain nicotine.

As soon as the FDA pulled e-cigarettes into its area of regulation, the vaping industry reacted by hiring lobbyists to protect their interest in Washington. They have also developed something of a history of paying for studies that show their product to be healthy and beneficial. They have also downplayed public health figures who are raising concerns about whether vaping may pose health risks that are different from those posed by tobacco smoking.

One crucial way that the vaping industry is disrupting tobacco is by distancing itself from its predecessor product. On the surface, the two products seem very similar: each is designed to deliver the drug nicotine through inhalation. But vaping has worked hard to make it very clear that its benefits are dramatically different than those of tobacco. Some of its claims include:

One huge benefit for vaping products is the ability to sell online. While cigarettes and associated tobacco products are technically available for online sale, in practice sellers are generally violating various local and state laws, and therefore don’t sell online.

Vaping regulations are much looser, however, and customers can buy a wide variety of products, including pens and e-liquids in many different flavors, online. This gives customers huge access to products that may not be available at their local convenience store. One such a great example is Vape Shop, an online store based in the UK that specializes in E-Liquids and Vape kits.

For teens or even adults who don’t want to be seen buying vaping products, or who may be trying to circumvent whatever local regulations exist, online sales are a huge boon.

Through a current lack of regulation, vaping is gaining a huge advantage over the tobacco market. It is expected that the FDA will attempt to regulate vaping in the future, and since it has stated that vaping products do fall under the cigarette categories, many people are wondering what will happen to vaping in the future, and how much market share will have already been consolidated before regulations are potentially put in place.

After all, scientists believed that cigarettes were contributing to poor health long before they were regulated, and ultimately, knowledge of the ill effects of smoking have not done much to curb the number of smokers in the world.

Vaping may follow a similar path, especially while the industry continues to insist that e-cigarettes are a viable way to stop people from smoking more harmful tobacco. What will also be interesting to continue to watch during this disruption is how the major players in tobacco react, whether they try to create a foothold in the vaping industry, or trust their majority market share to hold.

5 Ways an Exercise Routine Can Help You Break Bad Habits