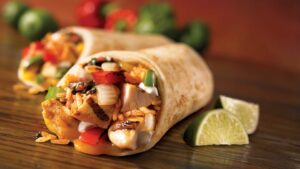 Name just about any trendy diet right now and I’ll name you a plethora of your favorite foods you can no longer have, or have to moderate past the point of recognition.

For example, Mexican food is a favorite of many, but it’s filled with dairy, carbs and many more items that would make it a no-go on your latest health quest, but there’s still a way to have some of your spicy favorites without having to moderate too much, or just by making smarter ordering choices.

Obviously, Mexican foods are known for their spice, and what makes that spice are peppers of all kinds, from jalapeños to serranos, and even habaneros for the most daring. Your fresh salsas, ceviches, and several entrees feature peppers heavily, and peppers – especially of the green variety – are loaded with vitamin C, a fat cutter that also has antioxidants.

If you’re preparing dinner at home, throw those peppers in a blender along with some other spices and some stewed tomatoes and you’ve got a fresh salsa. Rough chop tomatoes, peppers, toss in some cilantro and you’ve got a pico de gallo. Instead of using fried chips, try pre-cutting your tortillas and baking them.

But we all love takeaway, and if you want some spicy, savory and delicious Mexican food in Australia, look no further than food delivery services like Deliveroo, who will bring your Mexican food cravings to your door for you to enjoy from the comfort of your home.

Some of your favorite restaurants will have healthier options as well. Ceviche, as discussed earlier, would be a good appetizer or entree. A taco salad is a good way to get in a bunch of vegetables while satisfying your cravings. Choose black beans over refried beans, and your doctor will be as satisfied as your stomach is.

Opting for chicken or fish instead of beef is also another great way of getting in your savory favorites. Some smarter lunch ideas can include chile rellenos, or stuffed peppers, are another favorite, which also include a rather large pepper, which we know can be beneficial. Getting it baked instead of fried doesn’t make it lose any of what makes it a delicious favorite.

Lastly, don’t forget about the soups. Most Mexican soups have humble beginnings as a way to stretch groceries, and they are usually filled with vegetables. A chicken tortilla soup is filled with shredded chicken, fresh avocados, onion, garlic, bell peppers and chicken stock. Caldo de pollo or mixed interchangeably with beef, is one of those clean out your refrigerator soups that remains a staple in Mexican kitchens. Along with chicken or beef, it commonly includes potatoes, carrots, cabbage, squash, carrots, celery, onion and pretty much any other vegetable you may have in your crisper.

From preparing at home to eating out or getting your favorites delivered, there are plenty of ways to get some of your favorites without completely sacrificing the flavor you’re used to.