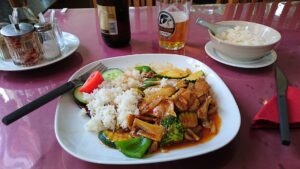 The traditional Chinese takeaway restaurant has been popular in Australia for well over a century. In the mid 19th century, many Chinese people came to Australia for the gold rush boom, and by 1890, one out of every three cooks in Australia was Chinese. The fusion of Asian cuisine with Chinese culture became ubiquitous in suburban areas, and the cessation of immigration and White Australia policies of the mid 20th century did little to dull its popularity. Chinese cuisine became a part of the multicultural facet of urban Australia. It has continued to grow, and Anglicised versions of traditional cuisines (like the California Nori Roll interpretation of Japanese sushi) have become usual dietary staples in the majority of Australian households.

Traditional Chinese cooking includes a variety of different styles, not just the urban takeaway generic style. These include:

Each of these are noted for individual interpretations, and use of styles of cooking and herbs and spices used.

The most popular style of cooking, and instantly recognisable in the traditional Chinese restaurants in Australia includes the well known sweet and sour dishes, stir fry and chop suey. Recently more styles of cooking have become well known outside of China and featured stronger flavours and more intense spices.

Chinese influence has spread across Asia, influencing the development of cooking in many regions. Chinese ethnic groups have particular flavour preferences and have adapted their cultural preferences into the generally recognised categories of styles of cooking, including Anhui, Cantonese, Fujian, Hunan, Jiangsu, Shandong, Sichuan and Zhejiang styles. Each varies the traditional ingredients (garlic, sugar, soy sauce, ginger, shallots, rice and other spice condiments) into varying amounts in order to create a wide variety of flavour palates.

Cuisine has developed from a distinct region, according to the availability of certain condiments, vegetables, personal and family preferences, and geography of the region. Some resultant styles are known for more spice and hot tangy flavours, than the milder sweet and sour (yet popular) stir fries often found in Chinese restaurants. There are some Anglicised interpretations of Chinese dishes, such as spring rolls, deep fried pastries, and some additives such as flavour enhancers have pushed popularity of certain dishes to greater uptake in urban areas. The demand for the anglicised version of Chinese cuisine makes the traditional appear to be vastly different to the appearance and flavour of traditional cooking.

The development over time of cuisine and what makes it distinguishable from other international foods is a fusion of historical factors, culture, the regional landscape and weather patterns (these affect growth of crops and accessibility of foods) and things such as location. Fish dishes tend to be more popular around lakes and coastal areas, where other meats feature in inland places. Also pending soil types different crops and preserving methods of food (such as bottling and fermenting of food) create different flavours. Cuisine grows out of necessity, availability of equipment, personal tastes, cultural norms (some countries have taboo attitudes over particular foods) and at times religious preferences. It also depends on the time involved in cooking, preparation of the food and the fuel used in cooking of the meal.

The Chinese typically offer the meal as a buffet style, where several entrees are offered, including rice and participants of the meal are able to help themselves to whatever dish they have a preference for.

Beverages are generally offered either before or after the group enjoys their meal, and is generally not served alongside the actual partaking of food. It is viewed as a digestive aid and relaxant and a social custom to sit quietly in genteel conversation after the sharing of the meal.

Four must-have accessories for your car to look awesome.