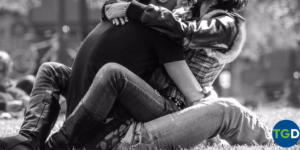 A common misconception is that when you fall in love you get into bad habits regarding your health. You don’t care about how you look and you don’t pay as much attention to making yourself healthier or more attractive.

The reality is that the opposite if often true. Being in love can actually make you a healthier person. It can mean changing subtle things about your life or making big improvements to your health.

We have found 5 ways being in love makes you a healthier and happier person.

#1 Your Stress Levels Are Generally Lower

OK, so take the small (or even big!) arguments out of your relationship for a minute. Being in love usually results in less stress and anxiety in life. We aren’t even just speaking about sex here either although this can be a big stress reliever.

Hugging and physical contact have been proven to increase levels of oxytocin in your system. This is a hormone that reduces stress and improves your mood overall. A research study separated couples who live together for a week. For the week that they weren’t together stress levels increased and most had difficulty sleeping which had a knock on effect of fatigue and poorer health. Not having this physical contact for just 7 days had a big impact on their mental and physical health.

#2 Your Risk of a Heart Attack Decreases

You might still get a flutter in your heart when you see your partner but the actual risk of having a heart attack when you are in love is reduced and quite significantly so.

Men who were in love with their partners and felt that the love was reciprocated were found be 50% less likely to experience a heart attack or any other heart related conditions. This was tested in men who were in the higher risk category such as those who suffered from diabetes and high blood pressure. Women are better off too as those who are in healthier, loving relationships were also less at risk of developing heart disease. This isn’t to say that any of you lovaholics out there will never have cardiovascular issues but love really does have an impact on the health of your heart.

#3 Your Lifestyle Choices Will Be Better

We opened this article by explaining that a common misconception is that couples get into bad habits and find it hard to change. After all, you don’t need to impress a new partner or the other person loves you for who you are.

When it comes to kicking bad habits such as smoking, drinking too much alcohol or not exercising enough, people in love do this much better than those who aren’t. In fact, when one half of a couple gives up or cuts back on their drinking the other person was 5 times more likely to do the same. There is a real correlation between working together to give up bad habits. Psychologically if the person you are in love with takes positive steps to a healthier lifestyle you will probably do so as well and not even realise it.

#4 Your Own Self-Worth Will Improve

Single people often suffer from low self-esteem or a feeling of worthlessness. For people in love it is a different matter entirely. A healthy relationship contributes massively to improved feelings of self-worth, confidence and positivity.

This can have big effects on your personal and professional life. You will be more motivated to change any bad habits you have (see number #3) and you will be more confident in your outlook so performances at work will improve as well. Being in love makes subtle but effective changes to your brain and the way in which you see yourself. Self-care and enhancing your own mood comes in hand in hand with being in love.

#5 You Will Live Longer

A UCLA study concluded that single people had a lower life expectancy than a couple in love with each other.

Single men are more at risk. A single man is nearly 200% more likely to die early from suicide, alcohol related problems or heart disease. A big part of this is what we wrote about earlier in that couples are more likely to influence each other to kick out bad habits however conditions such as cancer, depression and even the flu were found to be less prevalent in married couples who were in love than either those than weren’t or single people.

Love Does Make You Healthier

There are many exceptions to these points however being in love has been scientifically proven to have a positive impact on both your physical and mental health.

Being in love might not be the only thing that will keep you healthy but it will give you the foundation to a happier and longer life.

How Dating Over 50 Improves Health and Wellness