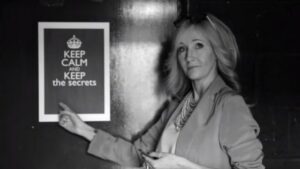 After 19 years, Harry Potter is back in the Muggle World, this time on stage. Harry Potter and the Cursed Child is the eighth part of an original new story by JK Rowling, Jack Thorne and John Tiffany. The first part of the play will be open to public on stage on July 31, which is also Harry’s birthday in the Magical World.

Seeing the culture spoilers that the Internet is (in)famous for, Rowling has urged fans to keep the story under wraps so that those who watch it later get to enjoy the “surprises built into the plot.” She even made hashtags #KeepTheSecrets and #DontBeWormtail – Wormtail being the character who gave away Harry’s parents’ secret location which eventually led to everything that happened in The Chosen One’s life! From the time when Rowling released her first book and film to the culture of spoilers we see today, seems like a lifetime.

The struggle of living with spoilers is real! Everyday, our news feed is filled with SPOILER ALERTS from our favourite shows, films and books.

The Shield to Spoilers:

The internet, by an unspoken agreement, has started to give out warnings before explicit details about favourite shows, books and movies are shared. Mostly. But, people end up sharing status messages or headlines in tweets, which gives the suspense away and 6 months down the line you, inadvertently, click on a link which gives away potential surprises.

However, Chrome extensions for blocking such spoilers is God’s gift to those who indeed want to shield themselves! There’s one such especially for Game of Thrones called ‘GameOfSpoils!’

Game Of Spoils, Protects You From Game of Throne Spoilers

Unspoiler, Blocks Headlines, Tweets, Facebook Posts that Could Have Spoilers

You know you have to look away every time you see this on your Timeline (Photo: Twitter)

But how can we forget all the times the internet has disappointed fans round the globe. Yep, here’s a list for it!

**SPOILER ALERT** to anyone not up to date on everything!

When you lay eyes on spoilers (Photo: HeroesAndHeartbreakers)

1.Game of Thrones: Sometimes, when GoT fans don’t know that ‘Spoilers are coming’, they find out about all their favourite characters dying (That list qualifies a separate post altogether!).

2. Derek Shepherd: When the internet was mourning Patrick Dempsey’s death on Grey’s Anatomy and we hadn’t even seen the episode. We couldn’t even!!

3.Star Wars: People knew to keep away from social media until they could…Because SPOILERS!

Nope, posting spoilers is an unforgivable sin, not even McDreamy can argue the point (Photo: Tumblr)

But hold on! There are those who thrive on spoilers. There are Facebook pages dedicated to giving away key plot points and people eat it up!

Netflix has a page dedicated to spoilers called “Living with Spoilers” with crucial scenes being played like a Russian Roulette for spoiler-lovers. There is a creative disclaimer to the site that reads:

Behind this door lie some of the biggest spoilers in TV and film. What you are about to see cannot be unseen

Spoilers have formed an important part of how we consume content on the internet. Whether we choose to ignore it, outrage over it or just accept it – it’s here to stay.

Coca Cola, Nutmeg and What Else You Needed for a "High" Society Menu

OnePlus 3 Review: Learning from Past Mistakes