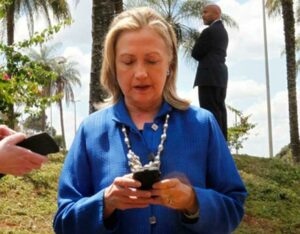 During a campaign stop in Nashua, NH Presidential candidate Hillary Clinton stated that we should block terrorist access to social media. “You’ve got to look carefully at terrorist groups and criminal cartels and other illegal actors to figure out whether they can use the Internet to cause crimes, to cause harm, to wage terrorist attacks and we can’t just let that go on unabated,” she said.

Perhaps she believes that when you open a new Twitter or Facebook account there is a required field that asks, “Are you currently, or have you ever been, a member of a terrorist organization?” And if we just put a bit of government pressure on Twitter and Facebook they will simply search their databases and shut down all those accounts.

If it were that easy then why don’t we put a similar question on gun purchase application forms? “Do you intend to use this weapon to rob a liquor store, murder your spouse, or shoot up a school, church or movie theater?” and if they say yes then we don’t allow them to buy the weapon. Simple.

But even if we could shut down terrorist access to social media it might not be such a good idea. There is a lot of evidence that, like the mythical Hydra, every time a suspected terrorist account is shut down multiple new sites are created almost instantly and the new accounts have even more posts. Even the head of the FBI has stated that monitoring social media sites does provide valuable information about terrorist activities.

The report did find that shutting down terrorist accounts as they are discovered does have some effect on the number of followers. Every time an account is shut down, even if it is restarted under another name, the number of followers tends to drop slightly. However, when a terrorist has their Twitter account shut down they tend to get pissed off and post even more frequently on their new account than they did on their old account.

The Brookings report says that while efforts to shut down terrorist accounts does have some effect they also warn:

Any approach to social media policing needs to include some consideration of our multipolar world. In our fight against terrorism, we do not wish to create precedents and authorities that would empower tyrants and repressive movements with tools to silence legitimate dissent.

You have to wonder, if elected would Ms. Clinton and her administration fall into the category of a tyrannical and repressive movement?