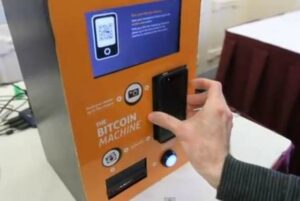 There are Bitcoin machines around the world but none on the African continent. Now, South Africa has a machine installed in a suburb of Johannesburg.

The local population may need to be educated on Bitcoins, but local entrepreneurs Rolf Dreppe and Monre Botes wanted to push the envelope and placed their newly acquired machine in a friend’s store, a business called Metroman. The machine belong’s to Dreppe’ and Botes’ company, Tremendis Learning. They partners hope to become South Africa’s main center for Bitcoin vending.

So, this Bitcoin thing doesn’t look like a fad. It doesn’t feel like a real alternative currency either, but the fact that it is reaching all the corners of the globe and that people are willing to dive into its acceptance suggests that there is something happen. We just don’t quite know what.

The Lamassu vending machine earns Tremendis Learning 6% of the value of each transaction, but considering the cost of the machine, it won’t be recouping its investment. It cost them about R75 000, including importation fees.

“We are also looking at putting machines in Pretoria and Cape Town, but we will use a much cheaper model that costs about R10 000.”

To get Bitcoin at the Bitcoin vending machine, consumers need to have a Bitcoin wallet installed on their smartphone. There are numerous apps available, but options include Blockchain for iOSand Mycelium for Android. These apps generate a QR code that the Bitcoin vending machine can read and use to deposit the purchased virtual currency. Given the exchange rate at the time of publication, a single Bitcoin will set you back the princely sum of R4 600.