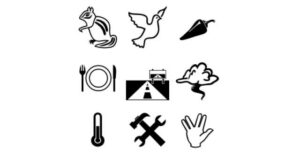 A new range of emoji have been created – some 250 of them, in fact – and will roll out to devices as part of an update to version 7.0 of the Unicode standard.

Emoji, in case you weren’t aware, are smiley face-style icons – you know, like the emoticons of old, but emojis offer a much wider range of expressions. Even more so now another 250 have been tacked on to the catalogue.

And some of the new offerings are, shall we say, rather colourful. Perhaps the one that stands out the most is the apparently much requested “reversed hand with middle finger extended”, which doesn’t really need any further explanation. It’s an upgrade to the “pile of poo” emoji, we guess, for those texters wanting to send a blunt message to the unfortunate recipient.

Another interesting one is “raised hand with part between middle and ring fingers”, meaning that the fingers are parted in the middle – the Vulcan salute which will be familiar to all sci-fi fans (well, and pretty much everyone else, sub-rock-dwellers excepted).

“Man in business suit levitating” is another one of the more interesting ones, at least for those executive types out there with otherworldly powers. You know who you are.

There’s also a “slightly smiling face” and “slightly frowning face” for those who aren’t particularly happy or sad (maybe we could call this a new subset: “Prozac emoji”).

And of course we couldn’t possibly live without the “hollow quilt square ornament in black square” emoji, which means, erm, that you like quilting with black squares. The likes of this and “heavy south east pointing vine leaf” of course points (leafily) to the origin of emoji; Japan. Some of them aren’t too relevant to the Western world, except for the purposes of bamboozling whoever you’re messaging.

We definitely need more businessmen with superpowers emoji, though – there can be no argument there.

As to when you’ll actually get these new emoji on your handset – that depends on how swiftly Google, Apple and Microsoft update their mobile platforms. But it shouldn’t be too far off…

You can see the full list of emoji additions here.

BYOD vs CYOD: Which is right for your organisation?