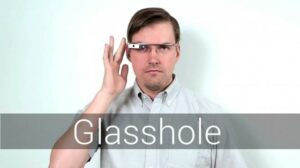 Do you hate Google Glass? Does your blood run cold whenever you see one of those human cyborgs coming towards you? Well one New Zealand designer has come up with a solution: cut off their Wi-Fi.

Berlin-based Julian Oliver has released a simple program that he calls Glasshole.sh, designed to detect any Glass device attempting to connect to a Wi-Fi network and block its access.

This is done, Oliver claims, by detecting a unique character string that he’s found in the MAC addresses of Google’s controversial augmented reality headsets.

You can install the program on a Raspberry Pi or Beaglebone mini-computer, and with a simple USB network antenna attached, it becomes a Google Glass detector. When a Glass user tries to access the local network, Oliver’s program uses Aircrack-NG to impersonate the network and send a “deauthorization” command, which cuts the headset’s Wi-Fi connection.

Oliver encourages users to “wear it, hide it in your workplace or your exhibition.”

“To say ‘I don’t want to be filmed’ at a restaurant, at a party, or playing with your kids is perfectly OK. But how do you do that when you don’t even know if a device is recording?” Oliver told journalists. “This steps up the game. It’s taking a jammer-like approach.”

The script was designed in response to art graduate Omer Shapira’s comment that the presence of Google Glass worn by audience at a graduate art exhibition left him feeling uneasy.

“If you’re recording the conversation without asking for permission — you’re just an asshole,” Shapira wrote in an impassioned diatribe. “That shouldn’t surprise you if you’ve had Google Glass on your head in any other social situation, but now you’re literally suspect of trying to steal an idea. Kindly and promptly remove yourself.”

Oliver has made his script publically available on his website, along with a piece of ASCII art reading “don’t be a glasshole”.

The Berlin-based artist describes himself as “an advocate of Free and Open Source Software and is a supporter of, and contributor to, initiatives that promote and reinforce civil rights in the networked domain”.

Google Glass is now on sale and available to anyone in the States, providing they’ve got the money, and also providing Google has stock of the device on hand.

In February, a San Francisco woman claims she was assaulted and robbed for donning Google Glass at a bar, the latest incident of backlash against wearers of the high-tech specs.

Box wants to upgrade the IT model for the user