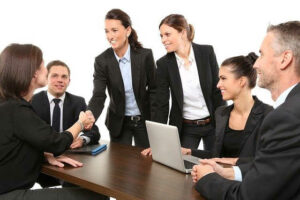 When I eventually decided what I wanted to do after leaving college, like many of you, I chose a field that I never really explored after graduation.  That field was HR, then called Manpower Management, and much of the focus in one of the classes was on Unions and how to stop them.   Unions tend to sprout when employees and management become disconnected, particularly when there is perceived employee abuse.  One way you keep unions from forming is to monitor employees closely and aggressively move to eliminate the dissatisfaction with management at the core of a successful Unionization effort.  The irony here is that Google knows every user and employee that Union busting efforts from my time would have killed to get. Yet, they showcase that these data collection companies have no real clue how to use the data they collect.

This situation is similar to a country going to war with the best weapons but failing to train its soldiers to use them effectively.  What makes Google’s Unionization ironic is that its employee compensation and benefits package is considered one of the best industries. Their failure to prevent Unionization is likely driven more by unfavorable perceptions than reality.  The ironic part is that it is likely no company with more Ad power than Google in the world. Ads are how you change perceptions showcasing that Google also doesn’t understand the real power of their primary source of revenue.

Finally, the tech segment has resisted Unions effectively for decades.  One of the ways it has done this is by effectively preventing Unions from gaining a beachhead.  This effort has successfully spanned decades, yet the firm that failed to prevent Unionization was one of the newer powerful firms, not one of the old ones.  And once a Union has a beachhead, they will leverage it to Unionize other technology firms.  Companies like Cisco have already erected firewalls against this activity. Other Tech firms should consider doing the same because it is very likely to spread once a Union penetrates an industry like a Virus.

Let’s talk about the right way to prevent Unionization this week.

Why Unions Are Bad

In concept, Unions are a good thing in that they create a balance between employees and management.  Here in the US, they are protected by law, and they are generally born due to bad employee practices resulting in an employee rebellion.   In practice, they often are company killers because they create a separate and non-aligned management structure that is political by nature.  In other words, Union bosses are elected and, if they wish to be reelected, they have to promise to improve employee benefits regardless of how the business is doing.

Unions, because they are built on political power, tend to favor tenure over performance. They like to protect jobs often regardless of the group or individual’s actual accomplishments, making firing a cause far more difficult (for instance, the Police Union is often shown as the cause for so many misbehaving officers).   My own experiences with Unions haven’t been positive.  From efforts to shut down new technology implementations like smart offices because you use Techs, not Unionized electricians, to lousy faith negotiations that leave employees worse off, to outright taking bribes to keep the Union Bosses from harming the business, I’ve had a surprising amount of Union experience.

In the first instance, I was in a Union myself working at Disneyland, and part of our contract was we got free lunches.  The Union went in and negotiated a $.05 an hour raise in exchange for dropping the free lunch.  Lunch typically costs around $5 – $10 at that time, or equivalent to 10 – 20 hours of that $.05 increase.  Yep, we got screwed.  A friend of mine used to give his Union Boss boxes of product every time the guy visited in exchange for not riling up the workers all under the table.  The guy would pull up, and the CEO would fill his trunk with the product regularly as part of the cost of doing business.  A few years back, I reviewed one of the most advanced Smart Offices in Canada and was told the project had been significantly delayed because the lights were connected with Ethernet cable and plug and play, and not hardwired.  The local Electrition’s Union took exception and aggressively moved to shut the project down, resulting in delays and cost overruns.   I’ve also seen Unions come in and shot down efforts for small startups to set up their booths, costing those startups critical funds they needed to survive pre-profit.

Unions are created or move into an industry on a wave of employee dissatisfaction.   Notice I didn’t say employee abuse.  While abuse may be part of the cause, depending on what happened, perceptions drive the effort.   A Union looking to penetrate a company generally fuels dissatisfaction within the employees, and they use that dissatisfaction to drive a favorable employee Union vote.  What generally doesn’t work long term is threats or actions against the employees organizing because that creates more dissatisfaction and can cross over into illegal areas resulting in government sanctions against the firm and even more profound distrust between workers and management.

Of the companies, I follow Cisco likely has the best Union defense.  They engage with their employees regularly, ask their opinions, report back on what resulted from them, encourage and help employees improve their communities, assist with retraining and employee development, and encourage a healthy work/life balance.

Besides a pre-existing union that might surround delivery drivers, cafeteria workers, or construction, Cisco should with these practices remain relatively Union free because little a Union could do that Cisco isn’t already doing for their employees.

In short, the best way to prevent a Union is to treat employees with respect, be aware of and effectively manage employee perceptions (countering with facts and perspective) any attempts to use false information by Union organizers against you, and engage with the employees. Hence, they know they count and will get the credit that they’ve earned.  Finally, recognize what compensation can and can not do.  Compensation doesn’t increase productivity; however, if compensation is perceived unfairly, it can have broad adverse effects that far exceed its value (Herzberg Motivational Theory).

With Google being Unionized, there is a reasonable chance that Unions will spread to other companies and, I’d expect, Facebook to be towards the top of that list along with Amazon for different reasons.  If one or both companies fall, Unionization will move from a beachhead to gain more solid footing and spread.

If you aren’t engaging with and have a good handle on whether a critical mass of your employees feel they are being taken advantage of, you’ll likely be toward the top of the Unionization list.  And, if you do Unionize and are a manager, you’ll likely find your job just got a ton harder and eventually experience the unfortunate excitement of a separate and very political management hierarchy.

Oh, and it should go without saying, but if you face the threat of being Unionized, it reflects on management competence and not in a positive way.  Your best defense is to fix that management shortcoming; otherwise, it will continue to fuel the effort to Unionize your firm, and Unionization goes from if to when.

What CES 2021 Has to Offer Amidst the Pandemic