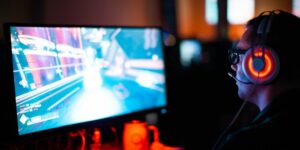 Daily active users rose to 43 million in May, a 28% increase from May 2020 but a 1% decrease from the previous month.

Hours engaged climbed higher to 3.2 billion, up 9% year over year and up 1% from April.

For the second quarter ending at the end of this month, analysts expect earnings of 13 cents a share on revenue of $692.3 million, according to FactSet.

The company went public in March through a direct listing, has seen its shares rise 24.5% in the past three months through some volatility.

Roblox Hit as Daily Active Users Slip in May

Bookings per DAU seen sliding up to 3%, company says.

Roblox shares fell as much as 7% in after-hours trading Tuesday after the company reported a decline in users and their spending on the gaming platform in May.

Roblox Corp. shares fell more as much as 6.5% after hours Tuesday after the videogame company reported key metrics from last month that included mixed…

Pixieray: The Birth Of True Smart Glasses And The Timing For Smartphone Obsolescence

Align Your Business Goals Into One Reality