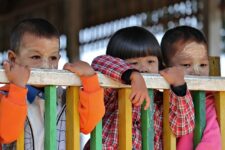 Soe Htay was a pro-democracy movement leader who fought against the military during the coup in February that toppled Myanmar’s Aung San Suu Kyi’s government.

Now, his family is suffering the consequences for his activism, as his wife and teenage daughter were taken by the police and are still imprisoned.

His youngest daughter, Su Htet Waing, who was barely five years old then, was tortured by forcing her into a half sitting, half standing pose during the 18 days she was in detention.

Soe Htay and Su Htet Waing are currently hiding in a make-shift tent in the jungles of Myanmar infested with mosquitos.

Months since the coup, similar cases are reported where children are detained for several days and are being beaten.

Children locked up for the political beliefs of their parents

Increasingly, Myanmar’s military is going after another group of people to sow fear among the population and make them fall in line: the family members of dissidents.

A U.N. authority to Myanmar says military forces that have taken over the Asian nation are abducting family members — including young children — as a tactic to compel fugitives to give themselves up.

The air force chief is part of the junta that ended Burmese democracy. His son and nephew have broad business interests, including supplying the armed forces.