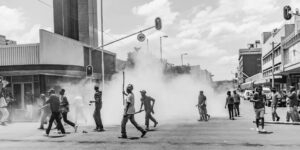 
The unrest is the worst the country has witnessed since the 1990s, before the end of the apartheid regime, the South African president said Monday.

The violence has continued in some areas and officials are concerned about the economic impact of the violence, looting and destruction of infrastructure.

The death toll now stands at 91 in Zuma’s home province of KwaZulu-Natal and 26 in Gauteng province. An additional six people were found dead on the roof of a mall in Thembisa township.

So far, 2,203 people have been arrested, according to Khumbudzo Ntshavheni.

The South African Police Service is providing armed escorts for the transportation of critical supplies.

South Africa Zuma riots: What’s behind the violence and looting?

Some analysts say the violence wasn’t spontaneous anger but a deliberate strategy of sabotage.

South Africa riots have had a far-reaching impact on the lives of the Indian diaspora following allegations of Gupta Brothers’ affiliation with Jacob Zuma.