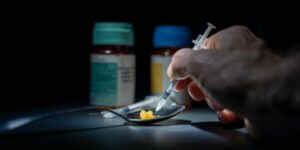 A man and a female inmate each face multiple charges including smuggling controlled substances into a correctional facility and conspiracy.

The drone is suspected of carrying heroin, methamphetamine, Xanax and muscle relaxers into the Theo Lacy Facility in Orange, California.

The inmate is accused of using a jailhouse phone to direct the man where to fly the drone, prosecutors say.

The man was arrested at a Costa Mesa apartment on Tuesday. He faces additional charges including drug possession and possession of an assault weapon, prosecutors said. He’s also suspected of using an assumed identity to rent his apartment and buy a 2018 BMW, they said.

Man arrested on suspicion of air-dropping drugs into O.C. jail via drone pleads not guilty

Chey Cody Smart, 43, of Costa Mesa, was arrested Tuesday after sheriff’s investigators discovered a drone loaded with heroin, meth and pills in a jail yard ? and found the controller at his residence.

A bizarre drug delivery inside an Orange County jail courtyard was dropped off by a drone.

A man who was arrested on a warrant this week tried using his eye patch to smuggle an opioid treatment drug into an Indiana jail, authorities said.

The Apple Launch: Some Impressive Improvements But I Miss The Excitement