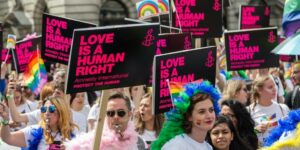 The LGBTQ family were targeted in a hate campaign after appearing in an ad for grocery chain VkusVill.

The firm later apologised and replaced the photo with one of a heterosexual family.

Yuma and her oldest daughter Alina are in same-sex relationships. The mother, Yuma, said on Instagram: “We hope we’ll be safe in Barcelona.” Yuma voiced her own pain at having been rejected by her parents because she’s a lesbian.

A 2013 law in Russia bans any promotion of gay values and lifestyles to minors in the country.

The family said they had experienced previous homophobic attacks, including ones targeting the LGBT international film festival in Moscow, which is widely condemned in the West.

In a YouTube interview, recorded just before their departure, they said: ‘In Moscow it was hell, there was an ambush, some chemicals were thrown at our volunteers’

A Russian retailer tried to be progressive and ran the first major ad to feature an LGBTQ family?but in the end, it hurt everyone.

A family that fled Russia after receiving homophobic rape and death threats for appearing in a supermarket advert has said the experience was “like a nightmare” and demanded the right to a normal life.

There is fury after VkusVill posted an ad showing a lesbian family, then removed it.

Coca-Cola is changing its Coke Zero recipe; People are worried