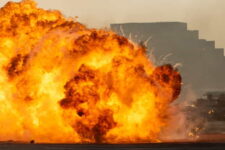 It was the third time Israel has carried out airstrikes in Gaza since the end of the 11-day war it fought with Hamas in May.

Each came after activists mobilized by Hamas launched incendiary balloons that caused fires in nearby Israeli farming communities.

There were no immediate reports of casualties from the strike, the military says.

Israel has vowed to respond to even minor attacks and in recent days, has eased restrictions to allow in Qatar-funded fuel, extend Gaza’s fishing zone, and permit increased cross-border commerce.

Egyptian and international mediators have been trying to shore up the informal cease-fire that ended the most recent war in May.

No casualties reported in attack that Israel has said was in response to launching of ?incendiary balloons? from Gaza.

After 2 weeks of quiet, arson balloons launched from Gaza start 4 fires in south

Firefighters gain control of blazes before they cause damage; new government has been quicker to respond to such actions, striking Hamas targets in Gaza in response

A screenshot of drone footage of a Jerusalem-area house damaged by Hamas rocket fire. Photo: Channel N12 screenshot. A Guardian ?

The Washington Football Team was fined $10 million for sexual misconduct

8 Tips for an Awesome Game Room