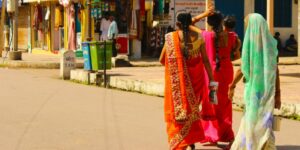 Neha Paswan is claimed to have been severely beaten with sticks by her grandfather and uncles after an argument over her western clothing.

She had kept a day-long religious fast and put on a pair of jeans and a top in the evening.

When her grandparents objected to her attire, Neha retorted that jeans were made to be worn and that she would wear it.

The following morning the distraught parents heard that a body of a girl was hanging from a bridge over the Gandak river. The body was that of Neha.

A murder investigation has been launched by police and Neha’s grandparents, uncles, aunts, cousins and the auto driver are among the 10 people who have been arrested and questioned.

The autorickshaw driver is accused by police of trying to dispose of the body.

Neha had wanted to become a police officer, but her mom said “her dreams would never be realized now”. Her father, Amarnath Paswan said he had worked hard to be able to send his kids to school.

Neha Paswan was allegedly beaten to death by relatives who disagreed with her choice of clothes.

A teenage girl in India was allegedly beaten to death and publicly hanged by male family members for wearing jeans.

Why India is talking about ripped jeans and knees

Thousands of women are sharing their photos in ripped jeans on social media – but why?

The largest criminal trial in Vatican history is about to start