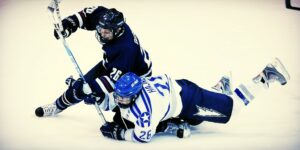 Hockey is a beautiful sport played in most of the countries around the world. This game is played by two teams who play against one another by a method of trying to get the ball acquired to their team and sending it to the relevant goal which allows them to score points. Each and every team player would have a hockey stick in order to get the ball to travel from one player to another. The game of hockey is also a prominent sport at the Olympic Games. Many countries in Asia are leading hockey teams to provide a great competitive challenge to the rest of their opponents globally. Hockey is not an easy sport which could be mastered in a short period of time or even playing it for few months. It is a sport played with utmost commitment and determination along with tough and hard practice for a long period of time which could then give you more glory for all your hard work. Speed, stamina, agility, conditioning and explosiveness are indeed useful techniques which are important for each and every player to have internally to focus as a great team which could lead to victory.

How hockey training differs from other sports training?

Training for hockey is really different from other sports. It takes a whole lot of new strategies and various approaches to make a skill full team mate. Talking about the training of hockey I would be introducing few essential points of training areas which is useful for every hockey player. Firstly is the structure balance which all the hockey player must have. It is indeed a very important sector in order to have a proper balance of your body to be steady while traveling with the ball and the hockey stick. By educating and gaining yourself a good structural balance will prevent you from injuries and other muscle and internal issues occurring. There are mainly three parts of your body which acquires to have a great balance and they are your upper body and then your lower body, from right to left and all your muscle groups. It is important you take this point into consideration if you would be looking forward to a great future in hockey.

The tightness of body in a hockey player

Then moving on to another important area of hockey training. We call it tightness. Having a tightness in a hockey player’s body can drastically effect your performance. Having tightness within you would not allow you to get any better at your speed and flexibility. Practicing split squats daily would really help and gain you support in removing tightness from your body. By attaining to this practice you would probably be a better player the next time you face a serious game.

The importance role played by energy

We all need some kind of sustained energy to play any kind of sport. But for a game like hockey, I believe you would have to pay more attention in gaining more energy than you thought. Training yourself for a proper energy system is the most important area when it comes to training almost for any sport especially played on fields. By having the sufficient energy to perform will support your physical and mental performance through the start and the end of the game. Hockey is an anaerobic sport. In order to train yourself with the appropriate energy levels needed you ought to get trained anaerobically. Through this procedure indeed your system and body condition would be much stronger than before.

Every sport consists of special exercises needed to acquire the strength, focus and stability needed for best performance. Talking about hockey, it too has a set of exercises which are probably needed to have a great physical strength and movement. It is also important to realize what you would be gaining from each exercise you would consider doing. It is best to identify your own strengths and weaknesses in order to improve the physical and mental strength of your body and then practice on relevant exercises.

What are the litigation and legal liability risks your start-up can face?

How to Make Sure Your Conference Calls Go Smoothly