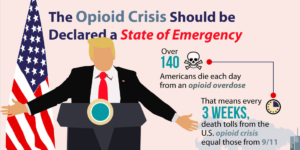 From 2015 to 2016, drug overdose fatalities rose by almost 20% in the U.S., making drug overdoses the leading cause of death for Americans under 50. Most of these overdoses involve opiates, such as heroin or prescription painkillers. Projected numbers indicate that these rates will be even higher in 2017. Even the average American life expectancy has been lowered to 78.8 years due to the opiate crisis. We haven’t seen a life expectancy this low since 1993, in the midst of the HIV/AIDS crisis.

In the mid-1990s, as the American HIV/AIDS crisis started to slowly improve due to increased awareness and improved treatment interventions, the opioid crisis began to emerge. Although opioids had already been used to treat pain for hundreds of years, the number of formulations provided by pharmaceutical companies exploded, as did the use of aggressive marketing aimed at both consumers and doctors.

Demand for prescription opioid drugs steadily increased from then on, also increasing the demand for heroin—a cheap alternative for people whose doctors refuse to write them additional opiate prescriptions. By 2016, rates of heroin use were the highest they’ve been in 20 years, and heroin-related fatalities were five times higher than they were in 2000. Because heroin is unregulated, dosages can be uncertain, and can cause overdose from the very first use. The risk of overdose is amplified by the fact that many drug distributors are now mixing heroin with cheaper synthetic opioids like fentanyl, which is 50 times stronger than heroin, and carfentanil, which is 100 times stronger than fentanyl.

One of the primary differences between a national state of emergency and a public health emergency is the way the emergency is handled, and the source of the funding. In a public health emergency, funding can be used to create new, temporary positions designed to fight the health epidemic in question. Federal health officials may also modify the requirements for Medicare, Medicaid, and the Children’s Health Insurance Program, as well as waive certain regulations pertaining to patient privacy and safety.

According to Addictions.com, if the opioid epidemic were declared a national state of emergency, on the other hand, more than one federal department would be able to collectively address the problem, both logistically and financially. Funds that would normally be allocated to natural disasters could be instead used to combat the opioid epidemic. Health care measures would be taken, but so would measures in other departments, such as federal law enforcement, possibly by tightening security at U.S. borders in an attempt to reduce the trafficking of heroin and illegally produced or distributed opiate medications.