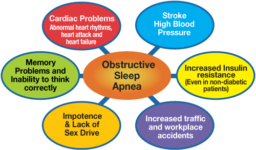 “Apnea” in sleep apnea is a Greek term which means “without breath”. Individuals who are afflicted with sleep repeatedly stop breathing during sleep, which occurs often for a minute or more, and many times each sleep time. This disorder can be caused either by complete blockage of the airway or by partial obstruction. Both of these causes may wake up a person who suffers from sleep apnea.

The three types of sleep apnea are obstructive, mixed and central, and of these types, the most common is OSA or obstructive sleep apnea. It is a sleep condition where an individual makes loud snoring with long pauses in breathing.

The location of the obstruction in the airway for most patients is in the soft palate, which extends to the site at the tongue’s base. There are no firm Structures like bone or cartilage in this region to hold open the air’s passageway. At daytime, the muscles in this area keep the airway open. But when a person who has obstructive sleep apnea sleeps, these muscles become relaxed until the airway collapses and become blocked.

The most common symptoms of OSA is loud snoring; not everyone that snores loudly has OSA. There are other conditions that cause snoring as well. Loud snoring with that is punctuated by periods of silence is the type of snoring associated with sleeping issue. Other symptoms of OSA include: excessive daytime sleepiness; shortness of breath after an abrupt awakening; waking up with a dry mouth or sore throat; waking up with a headache; frequency nightly urination; or difficulty staying asleep. Individuals with OSA may also complain of memory problems, Mood swings, or depression.

Sleep apnea disorder in children may include the followings symptoms:

3. Failure in gaining weight or growth

These are certain factors that can put individuals at risk for developing obstructive sleeping issue. These factors include:

– Excess weight, areas of fat around the upper airway can cause a breathing obstruction.

– High blood pressure. OSA is fairly common in individuals that suffer from this disorder.

– Narrowed airway. A naturally narrow throat or enlarged tonsils or adenoids may block an individual’s airway.

– Diabetes – OSA common occurs in individuals who have this disease.

– Male – men are more likely to have OSA.

– Race – African Americans, Hispanic, and individuals from the pacific islands are more likely to have OSA.

– Menopause – the risk of a women to develop OSA increases after Menopause.

– Use of alcohol, sedatives, or tranquilizers – individuals using any of these substance cause the throat muscles to relax and the development of sleep apnea.

– Smoking – individuals who smoke are likely to develop OSA.

Sleep apnea is diagnosed by a sleep study test called polysomnography (PSG) which is conducted by sleep specialist at a sleep clicnic. The PSG test records the biophysiological changes which the patients sleeps. Oximetry screening can also be conducted. This is a screening method that monitors and records an individual’s blood oxygen level during sleep. Portable cardiorespiratory testing is also an option. This is a test that is conducted at home to diagnosis sleep apnea.

Common obstructive sleep apnea treatments include raising the head of the bed. Elevating the head of the bed causes the persons tongue to move forward and sleeping on the side will cause the tongue to move laterally. Mild treatments include the patient getting more sleep, stop using alcohol and sedatives, lose weight and also the patient should avoid sleeping in the supine position. The supine position is when the patient sleeps on their back face up.

Another mild treatment is the use of a continuous positive airway pressure (CPAP) device. This involves the individuals with CSA wearing a mask over the nose while sleeping. The mask is attached by a hose to pump that supplies constant pressured air. This pressured air keeps the upper airway open and prevents airway closure.

In severe cases, that is, after getting armodafinil online or applying mild treatment without any improvement, obstructive sleep apnea treatment should be strictly provided by a qualified and certified sleep medicine physician. The first steep would be to conduct a polysomnogram which would include tests such as EMG, ECG, EEG and examining the nasal and mouth airflow for determining the severity of the sleep apnea condition. It may become necessary for the physician to perform the surgery in order to correct the disorder.

Following are some of the surgical procedures offered a reputable plastic surgery centers for reducing the airflow resistance and opening the airway:

Tracheostomy: The procedure involves inserting a tube in the windpipe through a permanent hole, by passing the site of upper airway obstruction. The patient breathes and speaks in a normal way as the tube is capped during the day time. However, before sleeping the plug is removed for the person to breathe directly through the tube. Likely complications associated with this procedure are bleeding, recurring bronchitis and stenosis.

Tonsillectomy and adenoidectomy: The procedure, which is a first line treatment for children suffering from obstructive sleep apnea, involves removing the adenoids and tonsils, resulting in reduction of sleep related breathing disorders.

Uvulopalatopharyngoplasty (UPPP): This is one of the most common surgeries in the us for treating sleep apnea disorder. It benefits the patients having excess soft tissue of the soft palate and uvula. The surgery involves tightening the walls of the pharynx and removing the tonsils.

Hyoid myotomy: In this procedure also, the muscles of the tongue base are advanced forward resulting in the tongue base pulling away from the back of the throat and enlarging the airway. It is usually not performed as a standalone procedure, but combined with other procedures that enlarge this portion of the airway.