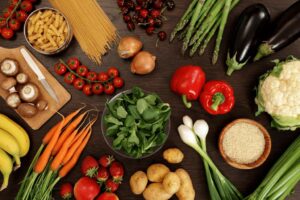 Gone are the days where people just ate because they were hungry. These days, the food industry is affected by fashion in the same way that clothing and shoes are.

In terms of food trends, the marketplace is ever-changing, but it’s safe to say that 2018 is all about the health-foods. It seems that everywhere we look, we see celebrity endorsements for healthy meals, vegan products, and trendy meal kits.

In this article, we’ll take a look at some of the most popular food trends of 2018. If you’re keen to stay on-trend in the food department this list may be of use to you.

Quinoa is extremely popular in the veggie and vegan scene and it seems to be used in just about everything that regarded as ‘healthy’ right now. Quinoa is popular because of its high protein content and is often used as an alternative to rice or wheat products. It also has quite a distinctive taste and is really tasty when cooked right.

But remember – it’s pronounced ‘keen-wah’. You can thank us later for saving you the embarrassment of saying ‘qui-no-ah’ in front of your hardcore vegan buddies.

As it’s so popular right now to switch to vegan or plant-based diets, alternatives to cow milk are surging in sales. There are a number of different options available, such as nut milk, oat milk, soy milk, and the extremely popular but gross-sounding ‘pea milk’.

Jokes aside, pea milk is very in right now, and, if you’re thinking about trying it, you can rest soundly in the knowledge that it isn’t green and, according to pea milk enthusiasts, it doesn’t actually taste like peas.

Alternative milk can be used in much the same way as regular cow milk, but it offers a low-fat dairy-free option for people with specific dietary requirements.

Yes, that title seems like an oxymoron, but vegetarian meats are extremely in right now. Why, you ask? well, duh – have you even seen Cowspiracy?

But seriously, as a consumer base, we are all becoming much more well-informed about the ethical impacts of our meat eating, and this is leading people to look for an alternative to meat that’s just as tasty and satisfying.

The good news is that this has lead to some pretty great products being developed. Word on the street is that some plant-based burgers are actually better than beef.

For example The Beyond Burger, launched in 2016, looks and tastes like real beef, but is made entirely from plants without GMOs, soy or gluten. And earlier this year, plant-based burger startup Impossible Foods got the green lightfrom the FDA that their burgers are safe to eat.

As the world has become more developed, we’ve all gotten a little busier, and this has created market demand for healthy meals made simple. To meet this demand, it’s now very popular to get food delivered straight to your door.

Cooking enthusiasts are opting for meal kits that have all the ingredients measured and prepared in advance, whilst the busiest among us are opting to have freshly prepared organic meals delivered.

Meal kits and meal delivery are not just efficient but they’re also really fashionable right now and are being endorsed by hundreds of celebrities online. Of course, this could just be really great marketing by the companies, but who can really complain about getting great organic meals without having to do any of the hard work?

As part of the worlds ethical renaissance, many people are now choosing to source their food locally as opposed to buying from large supermarket chains. There’s nothing more trendy right now than buying dirty apples from a local farmers market, but you’ll probably find that they’re pretty expensive too.

If you can find a farm shop near you that’s untouched by the fashionable nature of locally sourced food, then you might be able to get some healthy food for good prices but at the popular markets, you could end up paying a marked-up price for buying local.

Money aside, sourcing locally is great for supporting your local economy and some local farm foods will be healthier than their supermarket alternatives.

Avocado toast has been so popular this year that it’s basically achieved meme-status online. It’s caused much contention on social media between the baby boomers and the millennials, but that doesn’t change the fact that it’s super trendy, tasty and healthy.

Avocado contains healthy fats and proteins, which are great for people on a plant-based diet. You’ll see some variation on this on most trendy brunch menus and it’s a solid choice if you’re into ‘gramming your food.

As states across America are moving towards legalizing Cannabis, the popularity of cannabis-based foods has increased. There’s now a number of different ways to snack on cannabis, from sour candy and chocolate taffy to ice cream and cookies.

Of course, it’s not advisable to eat cannabis-based foods simply to stay ‘on trend’, so make sure you have yourself clued up on the effects of cannabis before you decide to try any products – and make sure its right for you (and legal, of course).

In a bid to try and stay healthy whilst still enjoying a sweet snack, people are turning to sugar alternatives to get their fix. Most of these come from fruits and syrups made from dates. Monk fruit is also another healthy sugar that is popular right now.

More like a smoothie than a soup, drinkable soups are becoming a popular way to pack in your veggies whilst on the go. There are tons of different drinkable soups available, and they are basically smoothies made from vegetables rather than fruit. They are probably quite tasty, but eating them cold seems like it would be something that takes a little bit of time to get used to.

There’s no denying the fact that we need water to live but, somehow, we’ve even managed to make that more hip. Hydrogen water is a stylish alternative to regular water that is supposed to give the drinker more energy and extra antioxidants that you can’t get from regular H2O. It’s unclear how much of this is scientifically proven, but you’ll be sure to look a little cooler than if you were drinking regular water.

Important Menstrual Hygiene Tips That Every Woman Must Know

Kicking the Smoking Habit by Switching to Vaping