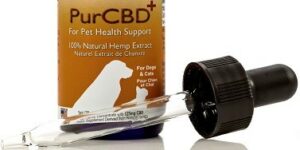 There is nothing I enjoy more than dispelling myths about CBD. What’s great for me is I get to do it all the time because there are so many. Today, we’re looking at the ones that drive me up the wall the most.

And they don’t just annoy me because I see them thrown around a lot. You’ll find CBD myths in this article where my research for it, felt like I was trudging through the desert without water. But now you don’t have to do the work yourself!

Cannabidiol (CBD) is a phytocannabinoid found in cannabis plants. Both hemp and marijuana fall under this genus of plants, but there is a very big difference between them, and that is the amount of THC in them.

Tetrahydrocannabinol (THC) is also a phytocannabinoid like CBD, but unlike CBD and the other 100+ phytocannabinoids, THC produces a high when ingested. We believe THC is most likely a defense mechanism to deter animals from eating it. Humans don’t have an extreme reaction to THC, but other animals, especially dogs, do — the high for them is akin to heavy alcohol intoxication.

Hemp is a variety of cannabis plants originating from Europe and doesn’t have notable levels of THC — most likely because there was a lack of animals in the region that posed a threat.

Marijuana is a variety of cannabis plants originally from India as well as Afghanistan. These plants must have been under constant threats because they are loaded with THC.

CBD is a cannabinoid, but what are they?

You might be wondering what phytocannabinoids are, and because of THC’s role, you might already have a guess. Despite their name, mammals produce cannabinoids as well, and it appears we do it for the same reason cannabis does. We produce them for protection.

Certain cannabinoids like CBD have anti-inflammatory or analgesic (pain relief) properties because they are the organism’s own medicine for taking care of these issues.

Cannabinoids are neurotransmitters the brain produces to attach to various receptors located throughout an organism’s body/system. When a receptor is activated by a cannabinoid, it produces regulation, communication, stabilization, and a host of other biological processes in the region.

CBD, when referred to as the individual molecule, cannabidiol, is the same in hemp and marijuana.

But wait, there’s more! CBD sucks when it’s by itself, and the oil doesn’t work for many. The other cannabinoids and terpenes play multiple roles, and one of those roles is allowing CBD, the molecule, to easily pass the blood-brain barrier for easy absorption and dosing. CBD does provide the most therapeutic properties of any cannabinoid by far — besides maybe THC.

But when isolated, CBD is terribly hard to dose and has a small window that you have to hit. Full spectrum CBD isn’t like this at all. CBD oil will eventually be referred to as full spectrum hemp or pyhtocannbindiol rich (PCR) oil.

This is also why you need to make sure your pet CBD tincture is derived from hemp to prevent THC because we want full spectrum for our pets.

When marijuana strains are said to be awakening, it’s because they have a lot of THC and low CBD. This couldn’t be further from the truth.

CBD will provide a slight boost in energy unless you move into higher than normal dosages.

Now we get into the myths that only cause a headache the more you research them. To understand CBD‘s legality, you need to know two things.

When defining marijuana, the Control Substances Act did not include the stalks of cannabis plants when defining it. The cannabinoids and terpenes can be derived from cannabis stalks in very small amounts — most are coming from the flowers however which are illegal. This is the first thing you need to know.

Second, in 2014, industrial hemp cultivation was legalized under pilot programs and higher education research. All parts of the hemp plant are legal for sale and use including CBD oil, if grown under the guidelines set forth by the 2014 Agricultural Act, commonly referred to as the U.S. Farm Bill.

Despite the DEA’s extreme statements in late 2016, they had to backtrack a good bit because of these two factors. A CBD product can be legal both federally and state-wise if it’s derived from stalks and under the guidelines of the U.S. Farm Bill.

Most aren’t, though, and the majority of CBD products you see on the market are probably derived from the flowers. However, the DEA would have to raid the company’s factory to prove this. They couldn’t do it even if they wanted because Congress has barred them from using the money to go after medical marijuana and CBD products.

Most states have passed CBD or medical marijuana laws legalizing CBD. If your state hasn’t, I highly doubt you will get in any sort of trouble. Maybe if you threw a CBD bottle at a cop. But there is probably like a 0.001% chance that you could. and weird things happen all the time so be safe.

Idaho, South Dakota, West Virginia, Nebraska, and Kansas are the only states where CBD might get you in trouble as they have not passed any laws that legalize CBD products in their state.

This is without a doubt the most annoying and arduous myth. Here are the straight facts:

CBD has been shown to raise drug concentrations and delay their effects, and this has shown to cause some issues. However, when this is seen, the answer is not to stop CBD but to either raise or lower the dosage of CBD.

A study found CBD increased seizures at low doses because it delayed the patient’s pharmaceuticals, but was too low to provide its own anticonvulsant effects to compensate. Once the CBD dosage was increased, seizures rates not only returned to normal but decreased — as did the pharmaceutical dosage.

That last part is really awesome to see, and while CBD ultimately helped, it increased seizures due to improper dosing. So if your pet is on a drug metabolized in the liver, you should talk to your vet and have them monitor blood levels to be on the safe side.

Overall, cbd oil for cats anxiety derived from hemp is extremely safe, and many pet owners swear by it.

Great Tips on How to become an Entrepreneur

How Changing Stigmatized Terminology and Standard of Care Can be Helpful in Rehab Centers?