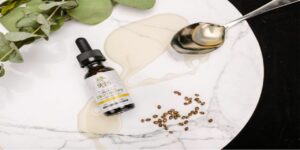 The cannabis plant has over one hundred cannabinoids that have beneficial impacts on the human body. Cannabidiol, also known as CBD, is one of them. Its many therapeutic attributes have sparked a widespread interest in recent years.

The non-psychoactive compound was part of a taboo narrative surrounding marijuana for decades. Today, it’s a dinner table conversation topic. CBD oil can be added to your morning coffee or integrated into your daily skincare routine.

The oil is a safe and effective option for those who are seeking the health and wellness benefits of cannabis without dealing with the mind-altering effects brought on by other cannabinoids like THC. In other words, without getting high.

The U.S. Drug Enforcement Agency (DEA) still has a stronghold on the legal production of marijuana for research. Yet, as more studies are conducted, we expect the list to grow even further. In this article, we’ll go over five of the many proven benefits of CBD oil that can have hugely positive impacts on your physical and mental well-being.

When many of us feel pain, our first turn is a bottle of pills. CBD is an entirely natural remedy, without all of the nasty side-effects.

Patients who seek relief can turn to tinctures, capsules, or even topical lotions made from concentrated CBD. For those looking for topical creams, you could buy CBD online at SabaiDee and through other companies that offer a soothing relief rub infused with broad spectrum concentrate from hemp.

One of the most commonly sought benefits of CBD oil is its ability to diminish pain. It’s a natural analgesic. The compound interacts with receptors in both the brain and the body’s immune system that help to lessen inflammation and alleviate pain.

The first cannabis medication approved by the U.S. Food and Drug Administration is called Epidiolex. This oral solution is used for the treatment of seizures that are associated with Lennox-Gastaut syndrome and Dravet syndrome, two severe yet rare forms of epilepsy.

Both of these conditions develop in early childhood and have a profound effect on the quality of life of its patients. CBD is one of the safest and most effective biological treatments

More than 60 percent of those who use CBD do so for anxiety, according to a survey conducted by the Brightfield Group. Users claim to have less nervousness and cognitive impairment that is associated with General and Social Anxiety Disorder.

Multiple studies have also shown that CBD can help with the Post Traumatic Stress Disorder symptoms such as nightmares and replay of negative memories.

CBD is thought to work with CB1 and CB2 receptors that are mostly found in the central nervous system as well as the peripheral nervous system. The exact interactions are yet to be fully understood by researchers, yet many assume that it may alter serotonin levels.

Serotonin is a neurotransmitter that plays a vital role in overall mental health. Low levels are associated with people who have anxiety and depression. Traditionally, low serotonin is treated with a selective serotonin reuptake inhibitor (SSRI) such as Zoloft or Prozac. CBD offers an alternative approach.

CBD and other cannabis compounds have been found to have an antitumor effect. Studies have shown that they can also amplify the death of tumor cells for both colon cancer and leukemia. Unfortunately, most of the studies have been pre-clinical, meaning they’re not conducted on humans and mammals.

While science may yet to have found the anticancer effects of cannabis, there have been many success stories. Take, for example, the case of Landon Riddle. When he was four years old, Riddle was diagnosed with a rare and aggressive form of leukemia. After months of grueling treatment, his mom began to refuse chemo.

At that point, his family moved to Colorado to become the youngest patient in the U.S. to receive a medical cannabis card. Landon began on Charlotte’s Web CBD Oil with some THC added to his dose, and he slowly weaned off the narcotics he was on. Today, he’s alive and well and cancer-free.

5. Reduce the Risk of Diabetes

Another fantastic effect of CBD oil is its ability to reduce the risk of developing diabetes. Diabetes is an inflammatory condition, and CBD has anti-inflammatory properties.

In a study published in the Journal of Neuropharmacology, scientists looked at the impact of CBD on diabetes-prone female mice. The researchers found that only one-third of the rodents using CBD diagnosed. This is compared to the 100 percent that was diagnosed in the untreated group.

Hopefully, as more resources are put into studying the medicinal properties of cannabis, we’ll discover even more of the groundbreaking uses of the plant. CBD oil has already proven to be an immensely valuable medicine that can be used to treat a variety of health conditions, so we can only imagine what’s to come.