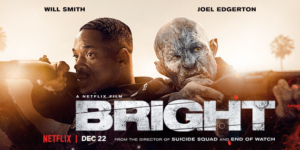 In today’s age, critics are more important than ever. With so much content being created for TV and movies throughout the year, there is simply too much to watch. We need to turn to the experts for their opinions on what to watch.

This is especially true considering that we can get content from around the world. You can watch US Netflix shows and movies while travelling abroad, and watch foreign shows in the US. There are excellent shows coming from around the English speaking world and beyond.

Of course, we turn particularly to those critics who generally like the same content we do. If you’re only a fan of science fiction, you’re not going to watch something like Wormwood no matter how much critics rave about it.

However, even those who praise the sort of content we like will sometimes pan a movie we would love. After all, critics are looking for things that the average viewer doesn’t care about.

This is no more true than with Netflix’s new movie Bright. With Will Smith at the lead, and a lot of money poured into production, Bright is supposed to be an instant hit. But critics have hated it. The storyline, character development, world-building, and its price tag have all come under attack.

And while it’s certainly no masterpiece, Bright is still a fun way to spend two hours. Here are some reasons you’ll like it, even though critics don’t.

Bright is not a movie that will bore you. There is action from the very beginning and it never lags. While this means there is less time for development of characters or themes, this was never going to be the sort of film that won awards for its depth.

The themes are relevant

Bright is set in a world in which humans and orcs live side by side. The orcs are despised by the humans, and the film is very obviously an analogy for racism in America. There’s nothing subtle about that, and that theme is not particularly smart or deep. However, because it is currently so very relevant, it is easy to get invested in the world of Bright. It speaks to us, even though it’s not using any big words or complex philosophies.

Made-for-TV-movie is no longer the insult it once was. In the past, this was usually a way to describe a movie that was not good enough for a run in cinemas, or did not receive enough of a budget to translate well on the big screen. However, Bright was actually made for Netflix. This does not detract from its value at all. And it makes it even less of a commitment than going to a cinema. You don’t have to pay for tickets or leave the comfort of your home. You can simply choose to watch it instead of an oldie on a night when you’re looking for a movie to keep yourself busy. The critics’ consensus is not nearly as important when it comes to movies released on Netflix. Give it a try, and if you hate it, just switch to something else.

The Importance of Teaching Design for Marketing Applications