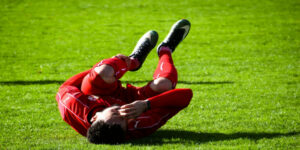 We may not think about it much, but anyone who has ever watched any sort of sporting event has almost certainly seen an athlete get injured. The injury may be something relatively minor, like a basketball player falling to the ground grabbing his ankle, then limping off the court to the bench without any assistance. It may seem severe, like a football player who appears to briefly lose consciousness after being tackled and driven into the ground by a 350-pound-linebacker.

But the very public nature of sports means professional sports injuries are going to be very public as well. As soon as a star player goes down, people start Tweeting about it and wondering how hurt he or she really is. That doesn’t happen if someone falls down during a game of pickup basketball with his coworkers. However, such injuries are way more common and likely than the kind you’ll see on a televised football or basketball game.

We’re told we need to stretch before we start exercising, and it’s not because stretching is fun (although it is for some people). The point is to loosen up your muscles and get them ready for strenuous activities. Not doing that can increase your risk of getting injured. Certain movements on the field of play are also more dangerous. We hear a lot about ACL and MCL injuries in football; there’s a belief that such injuries can be caused by making “cuts,” or sudden changes in direction. So if a player is running to make a play, then suddenly has to make a sharp change in direction, that could lead to an ACL tear. ACL tears are strange to watch because they often seem to happen without any sort of contact whatsoever.

Sometimes an athlete feels “off” before he or she suddenly gets injured; other times the incident seems to come out of nowhere. The same is true for amateur athletes. One minute it’s just you, your friends, some softball bats, and a ball, and the next minute you’re on the ground writhing in pain. It’s quite unsettling to feel like your body has betrayed you. Some athletes who are injured say they feel no pain in the first few minutes or even hours; that’s likely thanks to the adrenaline coursing through the body in the moment.

The initial shock will likely last anywhere from a few seconds to a few minutes, but it’s critical not to waste too much time trying to figure out what exactly happened to your body. You must seek medical treatment at either a hospital emergency room or an immediate care center. If you aren’t sure which level of care is right, be safe and head to the emergency room.

The good news is that treatments for sports injuries are better than they’ve ever been, and those treatments aren’t just limited to elite athletes. An injury doesn’t mean you’ll never be able to play softball or shoot hoops again. It means you’ll need to take some time and focus on your recovery and then ease yourself back into physical activities.

How to Communicate with Customers Face to Face