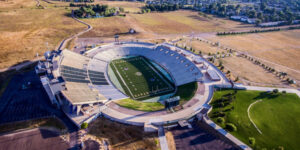 Sports fans will agree that they want to be comfortable and entertained while watching a game in a stadium. But have you ever stopped and looked at the features of some of the most popular stadiums? Some stadiums are simply jaw-dropping. Check out four of the most amazing sports venues the world has to offer.

The Float at Marina Bay, Singapore

This stadium is a true test of agility and athletic performance because it’s built on a floating platform. In fact, this stadium, which is 120 by 83 meters, floats on Singapore’s Marina Bay. The stadium can accommodate 30,000 people and hosts various concerts and sporting events. Soccer players have to have some fancy footwork to stop the balls before they go out of bounds. The design of this stadium is exceptionally unique and worth adding to your bucket list.

If you appreciate historic landmarks, then you’ll want to visit Stadion Gospin Dolac in Imtoski, Croatia. Home to Imtoski’s football club, the stadium accommodates 4,000 spectators, which include die-hard football fans and curious tourists alike. The stadium is built right into a natural valley along the Croatian and Bosnian borders, and the natural turf grows 43 meters above the bottom of the valley. From the colorful stands, you can see some of the town’s historic sites, including the old observation tower. The ruins of the old town are within easy reach of the stadium, making for an unforgettable excursion.

The Mercedes-Benz Stadium in Atlanta is on a whole other level. From the outside, the building looks like something from a science fiction movie, and its retractable roof is particularly eye-catching. The best part is the stadium is covered, but it still feels like an outdoor arena. The stadium is home to the world’s largest scoreboard, which is a whopping 63,000 square feet.

If you tend to wait until half time for a bathroom break, this stadium’s engineers haven’t forgotten about you. There are over 2,500 televisions throughout the stadium so you won’t miss a single thing. The stadium also houses 4,000 solar panels, so it’s environmentally friendly, too.

Atlanta might not always be the easiest place to park, but there’s no need to stress. National Parking simplifies event parking to ensure that your visit to the Mercedes-Benz stadium is nothing less than amazing.

The next time you’re in London, this stadium is worth adding to your list of sites to see. The world knows this arena as a major concert venue for legends like The Osmonds, but it’s also a spectacular site to see. The stadium has 90,000 seats and the largest seating capacity for a covered arena. A retractable roof partially covers the stadium, and it’s beautiful when illuminated. Its signature feature is the circular lattice that has a 23-foot arch and spans 1,033 feet.

No matter where you are, be sure to visit some of the world’s best sports stadiums. You’ll agree that they’re worth the trip.

3 Tips for Reducing Workplace Injuries in Factories and Warehouses