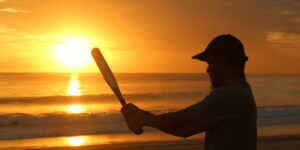 Baseball is called “America’s pastime” for a few reasons. It’s been around a lot longer than football, and purists claim that baseball is both easier to understand and less violent. On the second count, they’re definitely right, since there aren’t many people calling for the banning of baseball because of all the concussions. Sure, players must have enough situational awareness to not get beaned on the head by a fast-moving ball, but other than that, it’s relatively safe. Football is still popular, of course, but its ratings have declined over the past couple of years, for several reasons. If you’re looking to learn how to love another sport, now’s a great time to do it, and baseball is a great sport to choose.

Most of us have at least a vague awareness of baseball. We know what home runs are. We know that winning the World Series is a big deal. But what the heck does it mean when a pitcher is “behind in the count?” What does the term “designated hitter” mean? The terminology can all be a bit much, but if you know a few basic terms, you can figure out the rest on the fly. Ask a friend who loves baseball.

There’s nothing a baseball fan loves more than the chance to convert someone to the Church of the Diamond. Your friend can tell you that a pitcher who is behind in the count is throwing more balls than strikes, and that’s bad because throwing four balls means the batter gets a free trip to first base. Also, a designated hitter is a guy who goes up to bat but doesn’t play on the defensive side of the ball. They’re usually deployed to keep a pitcher from having to bat, since pitchers aren’t known for hitting many home runs. Oh, and they only exist in the American League, not the National League, but that’s a long story.

Your fanatical friend may insist that, if you really want to commit, you should sit down and watch all 18.5 hours of the Ken Burns documentary on baseball, but that’s advanced-level stuff you can worry about later, like in winter. Springtime and summertime are the times of year when you need to get out of the house and go see the real thing. If you don’t live in one of the 30 towns with a Major League Baseball team, no sweat. There are minor league teams all over the place.

They’re a great, cheap way to have fun and get educated about the game. If you like what you see from the minor leagues, then go see an MLB game the next time you’re in a big city. When you’re visiting your sister in Cleveland, look into buying tickets for a Cleveland Indians game. Are you planning a trip to Seattle with your significant other? Consider taking in a Mariners game at Safeco Field. The baseball season lasts from April until October, and each team plays 162 games, so you’ll have plenty of chances to see your new favorite sport.

How to design personalized flyers for a business