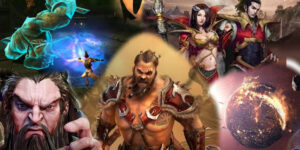 Massively multiplayer online games, referred to by those in the know as MMOs, have experienced a surge in popularity since the overwhelming success of award-winning World of Warcraft. 2017 is shaping up to be another strong year for this unique sector of the gaming industry, so here are five exciting MMO titles to look out for this year.

If your dreams at night are made up of colonizing other planets, mining from them, trading with other players, and battling fiercely against them, then you’re likely to be pretty impressed by this strategy-based MMO game. This title has been designed with simplicity in mind; it’s meant to appeal to players with no experience of MMO games who want to venture into the genre for the first time, although it’s likely that seasoned MMO players will also be keen to try this one out. Alpha testing has just finished, with the game’s developers preparing for a US and European launch date later this year. Exact dates are TBC, so watch this space for more news.

If pure power rather than space exploration is more up your street, then enter the world of Vikings and become an all-powerful Jarl. This particular free-to-play MMO from Plarium boasts speedy gameplay, graphics that seem to burst visually from the screen, and offers gamers the chance to build up resources like food and stone, join or create clans, before fighting global battles.

There’s the potential with Vikings: War of Clans to spend hours looking after your virtual barracks, making sure you have plenty of trained horsemen and slayers on tap, and enjoying the satisfaction that comes with taking on the challenge of moving up levels to ensure your clan is able to truly devastate others in the global war.

It’s not the actual game content of Becoming Preta that’s exciting gamers; it’s the fact that this game is cross-platform and VR compatible. There are suggestions that 2017 is going to be the year that sees VR become fully mainstream as headsets become more affordable and the range of games making use of VR technology becomes more diverse. Becoming Preta simply adds credence to that argument.

The MMO game, which has been criticized slightly for having relatively poor translations, offers gamers the chance to play as one of three characters. Whether you choose to be a warrior decked out in full-on armor, or an assassin in heels, you’ll enjoy developing your own story with this innovative roleplaying title.

Based on the successful Blade franchise, the Unreal Engine 4 version of this MMO game isn’t necessarily the best for those who like their games to be fast-paced and aggressive. Some of the strategic gameplay can feel a little lethargic, although Three Kingdoms Blade makes up for this with some stunning graphics. The game is heavily character-based, with a multi-character system, which means that boredom or complacency with the same character simply isn’t an option. Overall, this is one for those who enjoy strategy-based games and the thrill of a slow build.

Legend of Mir boasts amazing graphics created using Unreal Engine 4, along with a long history prior to its release as a game for mobile. This MMO game ticks all the right boxes for having the potential to be truly epic. With fluid action combat complementing the graphics and the gameplay, enhanced by the chance to pick from four very distinct characters who have their own weaponry and abilities, WeMade Entertainment appear to have a big hit on their hands when the game finally gets a release date.

How to get your business noticed online?

Learn New Skills to Take Your Career to the Next Level