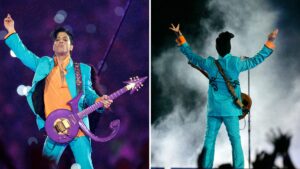 Music superstar Prince Rogers Nelson died at the complex that housed his recording studio and home in a Minneapolis suburb at the age 57. His death stunned a music world heavily influenced by his string of top-selling hits, gifted songwriting and dynamic stage performances.

Here is a look at his legacy:

Prince’s best-selling album was released in 1984 to accompany the semi-autobiographical film of the same name, in which he played an up-and-coming singer known as The Kid trying to make his mark in the Minneapolis music scene. He earned an Academy Award for best original song score.

The album of the same name spent a total of 24 straight weeks atop the Billboard chart and ranks as one of the top 40 albums of all time in US sales, with sales of 13 million units, according to the Recording Industry Association of America.

In addition to the title track, which reached No 2 on the US charts, the album spun off other hit singles: When Doves Cry, which went to No 1 in the United States, Let’s Go Crazy and I Would Die 4 U.

Prince, who wrote or co-wrote every song on the album, won two Grammy Awards for the album.

Released two years before Purple Rain, 1999 was Prince’s breakthrough album and the first to feature his backing band at the time, the Revolution. Also considered deeply influential, 1999 sold more than 4 million copies in the United States and spawned the hit singles Little Red Corvette and the title track.

The final album Prince made with the Revolution served as the soundtrack to the 1986 film Under the Cherry Moon – which Prince directed and acted in – and was hailed by critics as one of the best releases of that year. It featured one of his biggest hits, Kiss.

Prince has sold more than 36 million albums in the United States during his career, according to the Recording Industry Association of America.

Prince won seven Grammy Awards and was nominated 37 times. His wins included best soundtrack album for his 1984 Purple Rain and best R&B vocal performance by a man for the song Future Baby Mama from his 2007 album Planet Earth.