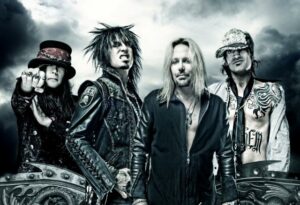 We just reported here on TG that the rights to Escape From New York just got sold again, and lately we’ve been seeing a number of projects jumping around from studio to studio like this, trying to stay out of development hell. (The Steve Jobs biopic was originally at Sony, then moved to Universal.) Another project that apparently refuses to die is Motley Crue’s The Dirt, and it just got resold to Focus Features.

The Dirt was the band’s best-selling biography that opened the floodgates for a lot of rock books, and there’s been efforts to make it into a film for many years now. Notorious Motley drummer Tommy Lee has said the movie will go with an unknown cast to play the band.

While we’ve been waiting for the rock movie to make a comeback, we think it could have a better shot with the upcoming Scorsese / Jagger series, and the Cameron Crowe series Roadies. It’s hard to do a rock biopic without it coming across as clichéd and cartoony, and we just don’t see The Dirt being much better than a lame VH1 TV movie.

Much like the book, and the band itself, we’re sure it’s going to be nauseatingly self-congratulatory and self-important, and maybe its lack of self-awareness could end up making the movie unintentionally funny. With Motley Crue claiming they’re finally going to bring it all to an end soon, there’s obviously a push to try and finally get this movie made. We’re not holding our breath on it, although the band could definitely make a nice side business out of reselling the script every few years.

Panasonic ToughPads and Why the Sapphire Revolution Failed