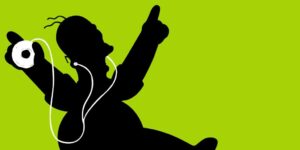 It has nearly been four decades since the epic gadget ‘walked’ into the lives of people and changed their perception on music in general. Back in 1978, the Japanese company Sony invented the “Walkman”, with the help of the company’s co-founder Masaru Ibuka. He asked the developing team for a device which would let him listen to classical music during his long business trips. The birth of portable music players.

The Walkman was first introduced to the Japanese public, and a year later, it was available worldwide. The Sony president originally hated the name Walkman( a homage to its predecessor, the Sony Pressman tape recorder), but the ad campaigns were already rolling and it was too late to change the name. Despite Morita’s reservations, The Walkman would be responsible for one of the greatest profits Sony had ever seen, and nearly four decades later, it is still a star.

The Walkman evolved over the time becoming the trendsetter for future mobile entertainment gadgets, and the upcoming digital revolution.

Digitalization rapidly started changing the entertainment business and the way we live. We moved from tube TVs to HD flatscreens on the wall, and from HD to 4K on our mobile devices. From shopping in the corner store to Amazon and Ebay. Even the gambling industry moved from Monaco and Las Vegas to the internet,

Like everything else, the way we listen to music evolved further. The digital (music) revolution started with the CD (compact disc). The Walkman became the Discman, and soon personal, portable and high quality music players were taken for granted.

The real revolution came with the MPEG audio coding format, commonly known as mp3. This brought about the first digital audio player in 1998, The MPMan, which was not from Sony, as the name might suggest, but from the South Korean company SaeHan Information Systems.

The revolutionary MPMan could only hold up to 8 songs or a 32 minute long playlist, boosted with a solid nine-hour battery life. This marked the beginning of the mp3 era. Although it took other companies much longer to perfect this technology, it is sometimes Steve Jobs who is given credit as the inventor of the mp3 player, even though his iPod hit the markets three years later.

Jobs’ iPod allowed people to store up to 1000 songs on the 5 GB player. The iPod’s design, functionality and portability was truly revolutionary. If the Walkman’s sales were extraordinary for their time, the iPod sales were unimaginable.

The iPod enabled Mr. Jobs to pave the way for the iPhone, a cell phone that marked the smartphone era. Older phone models soon became known as dumbphones, compared to the new computerized entertainment centres, disguised as a phone.

Modern smartphones are capable of storing, and playing, hours, maybe even days, of good quality music. Modern technology has made it possible to carry your whole music collection with you, where ever you go and listen to it whenever you want. But that is apparently not enough.

Thanks to the internet, cheap storage and limitless data packages, services like Spotify, among others, are giving you the possibility to listen to nearly every piece of music ever performed at the tip of your fingers. And what you can’t find in one place you’ll find somewhere else on the world wide web.

We have come a long way from the mono Walkman, that could only play max 30 minutes of mediocre quality music, to gigabyte phones and limitless online music. I personally have no idea what could come next.