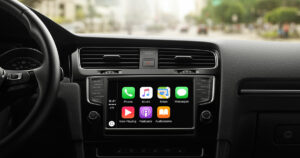 The Paris Motor Show has shown us that 2018 will be the year of the connected car. Many manufacturers presented their innovations at the Paris show, promising us an ever more exciting and connected future. However one thing will remain striking: the lack of unity and consensus in the development of major brands. The protocols remain under discussion between the various consortia, although two operating systems from smartphones are doing well: Apple’s CarPlay and Android Auto for Google. The war of connected objects in our vehicles is just beginning.

CarPlay is Already Here and Active

Apple’s CarPlay is a touch-sensitive interface that mainly works by voice recognition and integrates the iPhone 5 or 6 applications. So far, the Toyota Corolla has one of the most popular cars featuring CarPlay. We have also seen CarPlay on the Ferrari California T already available on the market. Each developer must make their CarPlay-compatible application available for them to appear in the car. Thus it is mainly the functions; messages, call, GPS (coyote or plans), and music (Deezer and Spotify) that are available. The system will be available on select Honda, Hyundai, Mercedes and Volvo models by the end of the year.

The theme of the connected car is very broad. It cannot be reduced to simply connecting a smartphone to a vehicle. Let’s first try to take stock of this subject which has often been discussed during this last year. If we were to segment this vast domain, the different groups of features would be:

– Recovery of information on the car: consumption, state, anticipation of failure…

– From mobility management to task delegation: information on traffic, optimization of consumption, and assistance with parking…

– Well-being and safety: alert in case of danger, assistance in case of accident, detection of fatigue etc…

– Entertainment or infotainment: smartphone replication in the car especially for calls, messages, GPS and music.

Connectivity goes beyond just mere entertainment: the potential is huge! However today the main connected experience of the general public is through the smartphone, the car must therefore communicate fully with the tool. Thus the information on the car can be analyzed through an application, the remote control will be on the smartphone, and the GPS can be that of the phone.

But of course it’s not that easy on the customer side. The stakeholders in the smartphone industry have understood that the connected car is the precursor of the connection of the house, the city and even the industry and that consequently, it is necessary to position itself as a leader so as not to miss the mark of the internet evolution. What have we seen so far in the world of the car?

The Beginnings Of The Builders

Many car manufacturers have already developed their own infotainment system, which remains for the moment reserved for high-end vehicles. These solutions have the flaw of not optimizing user experience, and have already been challenged by Apple or Google solutions.

An Encouraging Future But A New Problem

The automotive industry and the mobile industry have so far been completely independent: different stakeholders, different development cycles and different technologies. Today they will not be able to ignore each other and will have to work together. Only new entrants such as Tesla can afford to provide a fully integrated offering.

9 Benefits of Team-Building Activities in the Workplace