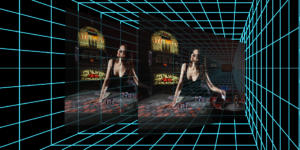 The online casino sector is fast moving and highly responsive to developments in technology. Because it’s such a competitive space, no-one who enters the market succeeds by standing still, and there’s a constant battle between competitors to be the first to bring out the next big thing. This is a positive, in terms of the development of the industry and the improving customer experience. By continually pushing the envelope and expanding the boundaries of possibility, companies and game developers alike are advancing daily towards the optimum playing experience.

While this innovation is commendable, and an important part of what keeps the industry so relevant and fresh, not all new technologies live up to their potential. One that has had more than its fair share of hype in recent years is virtual reality technology, which some have described as having groundbreaking potential for future direction of remote gambling. Yet as it stands today, the big casinos are not investing anything like as much as you might think in developing the technology.

So is virtual reality being overlooked as one of the most important developments in the history of remote gambling, or are the casino operators wise to the limitations of a technology that might not quite live up to the hype?

A Case for Virtual Reality

Imagine for a moment playing your favourite slots game. Except instead of playing it online or on mobile, you’re playing it in a much more immersive environment. Virtual reality makes it possible that gamers can be drawn into the slots world – instead of playing a game that looks like ancient Greece, you can be transported to that world, for a fully engaging and immersive shot at winning the jackpot. Or imagine playing blackjack online, then imagine playing at a virtual blackjack table, immersed in the game action like you were sitting in a casino for real.

It doesn’t take much imagination to envisage the strengths of virtual reality, and the potential it holds for the industry. Given that the pressure is on games developers and casino operators to deliver ever more exciting games and challenges for their players virtual reality creates a whole new dimension to the art form.

Obviously virtual reality is still in development as a technology, and the games still have a long way to go to reach their full potential. Yet despite the clear strengths on the user experience side from VR gaming, casinos are proving unusually reluctant to get in wholesale behind the tech.

A Couple of Snags

Unfortunately, there are a couple of snags to the development of virtual reality. These are hurdles that need to be overcome before virtual reality could ever hope to take off to the level that would be required to bring this genre of casino games to life.

The most obvious restriction is the hardware issue. While virtual reality headsets are becoming much more affordable and gaining some traction, the fact remains that most people aren’t set up for virtual reality. Until the hardware reaches critical mass, it will remain a minority pursuit, and something that game developers will struggle to exploit profitably.

At the same time, developing games for virtual reality is more costly than developing regular casino games. That’s obvious – there’s so much more involved when you’re creating a fully immersive experience, relative to a game designed to be played on a mobile or on desktop. In this respect, the market for virtual reality gaming is in no way mature enough for the serious players to spend their time and resources on further development.

That’s not to say there is no work in this area – game developers like NetEnt and Microgaming are still developing games for virtual reality and exploring the possibilities of the technology. However, when it comes to the casinos themselves, these hurdles are still regarded as a major limitation to any virtual reality future.

The Position of the Big Casinos.

For the time being, virtual reality is still a novelty, and it’s in serious danger of falling into the gimmick or passing fad category. As such, it’s perhaps wise that the big casinos are not yet prepared to get fully behind the technology, instead choosing to focus on building on their existing offer while waiting for the market in virtual reality to mature.

The likes of Party Gaming have sounded positive notes about the potential of virtual reality, and few would deny it’s a technology that could have profound implications for the gambling sector. However, while it remains a developing technology, too few people are familiar with VR, own the hardware, or have the desire to explore these types of games.

6 Simple Tips for Businesses that want to Find New Customers

Not sure about hormone therapy? Check in to see if it’s for you