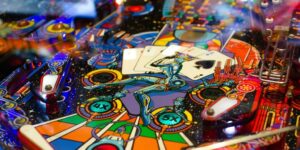 If you’re a long-time fan of one of the longest-running game shows in the United States, then you’ll have already heard of Plinko. If not, settle in, as The Price is Right made this entertaining game one of the best out there for enthusiasts of all things chaos theory.

Made famous across the world on TV game show The Price Is Right, Plinko is a game of apparent randomness played on a pegboard-like board. Contestants mount a set of stairs to be able to stand at the top of the Plinko board and aim to drop anywhere up to five chips into the board, with the hope that their chip would fall into one of the higher value spaces on the board’s base. This base is split into around eight to nine different slots, all of which have a different value. Certain slots are of higher value compared to others, and contestants aim to get one of their chips into these slots.

Once dropped into the Plinko board by the contestant, the chip bounces off strategically placed dowels or pegs that are deliberately placed across the pegboard in order to disrupt the path of that chip across the board. The apparently random path taken by the chip on its descent down the board is what makes Plinko so entertaining, as it feels like a real game of luck. However, you heard it here first: Plinko can, in fact, be gamified. It requires statistical know-how and practical skill, but it can be done.

Pinball is very similar to Plinko, which is why the two are often confused. Much like Plinko, pinball is a game typically played in arcades by one contestant. Players use two buttons on either side of the Pinball machine in order to try and manipulate a small ball to the top of the machine. If the ball drops to the machine’s base because of an unlucky interaction with one of the various obstacles in the way, the game is over.

A pinball machine is specially designed in order to disrupt the path of the ball and encourage it to fall to the machine’s base so that players have to restart another game and keep playing. It’s fast, it’s addictive, and it can even be themed on different movies and TV shows to add an extra element of fun.

Pinball is actually one of the oldest games we have, much like bowling or bowls. It’s become popular for its fairly simplistic gameplay and can be played both via physical machines and through digital offerings.

What’s the difference between pinball and plinko?

Plinko and pinball are fairly similar in format. One player aims to win prizes by attempting to navigate a ball or chip across a board. The journey is made more complicated by obstacles designed to throw that ball or chip off course.

The main difference is in the direction of the ball or chip’s travel. With Plinko, the chip is dropped in from the top of the board, whereas with pinball, the aim is to keep the ball from touching the machine’s base. The player also has more of a degree of control with pinball, as they can use two arms or springs in order to try and push the ball back into play. Once the chip has been played on a Plinko board, however, the gamer has no control over its journey.

Pinball and Plinko also differ from pachinko, which is a Japanese game that combines pinball with the fun of slots. It’s seriously popular in Japan, which has thousands of parlours where players come to participate in the game. Players pay for a number of balls, which are then dropped into the machine, and the aim is to get to the top of the board in order to win cash prizes.