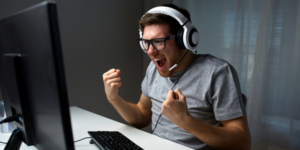 “Cloud gaming” has been a buzz word on the interweb for years. A term relating to the ditching of old, heavy, but all powerful console games, in favor of “the cloud”, a server which runs a game and streams a video of the gameplay to the player. Many gamers have dubbed cloud gaming the future of gaming, but is it?

What is cloud gaming?

Cloud gaming is inextricably linked to video streaming, following a similar service. Your keyboard, mouse and controller actions are sent over the network to the cloud gaming server which does all of the hard work while your computer essentially receives the streaming video and audio from your input commands. In a short, cloud gaming is an interactive streaming video service teeming with advantages.

An inexpensive investment of a streaming box and controller that plugs into your television and home network means you can save hundreds. There is no need for purchasing a new, or upgrading an old, PC or console to enable it to hold the hardware needed for incredibly realistic graphics and audio. Instead, just use your existing hardware combined with your inexpensive streaming box.

Similarly, mobile app based games like Dungeon Hunter, Gear.Club, and Rivers Casino do not require expensive hardware and upfront software download costs and are fast improving in quality and interactivity.

Enjoy gaming on any iOS or Android device

Cloud gaming is ushering a new, platform-independent, style of gaming which favors PC’s and tablets running iOS, Android, Chrome OS, Linux and Windows RT, not solely Windows. This means the majority of exclusive, non-mobile, games currently tied to PC’s or consoles, most often windows, can become widespread and more accessible through cloud gaming.

Streaming sites such as Vortex and GameTreeTV let you play your favorite game whenever and wherever you like on your mobile devices and tablets.

While some games may require a download, typically between 10GB and 20GB, cloud gaming normally allows players to start gaming instantly as the server already has the software for that game installed meaning one can start immediately.

If cloud gaming continues to become the future of gaming, TV manufacturers will integrate the hardware support needed for cloud-gaming services into their smart TVs. This kind of integration would be relatively cheap and straightforward to install and would then make for great gaming spectatorship. Cloud gaming offers easy spectating for professional gaming matches, this also wouldn’t need any hardware to be installed.

While a small number of cloud gaming services are currently in operation, the barrier to entry in this market is falling. Developers are overcoming the technological challenges associated with cross device compatibility, and big names are increasingly showing their interest. Sony’s acquisition of Gaikai in 2012 is proof that big names venturing out into this technology.

NVIDIA has also recently developed the Shield – an Android-powered handheld game console which has the ability to stream PC games wirelessly to your mobile device or TV. Not only does this mean Latency would be lower, because you’re streaming directly from your home network. But, it appears to be taking the advantages of cloud gaming forward, simultaneously bypassing the negatives, such as video compression, DRM and Bandwidth.

This has allowed NVIDIA to tap into the power of an expensive gaming rig from any computer making one of their most popular releases GeForce Now an incredible game. A model and form of cloud gaming that French startup Blade is looking to improve upon with their Shadow Cloud.

It has been announced Google is the latest cloud gaming innovator. Sources claim the platform, dubbed Yeti, will be available on Chromecast-enabled devices. Essentially Yeti will be following the same cloud gaming route as NVIDIA Shield and Blade Shadow Cloud. However, Instead of relying on downloads, gamers can enjoy games from Google Play Store, and Google will also be releasing a dedicated piece of cloud gaming hardware.

The future looks bright for cloud gaming. The world’s biggest gaming and tech innovators are claiming a stake in it which suggests it’s here to stay. But what do you think? Are you a fan of cloud gaming or traditional PC/console gaming? Let us know in the comments section.

Why you Should Open up a Cryptocurrency IRA Account

Singapore: How The Silicon Valley Of Asia Is Driving Technological Innovation