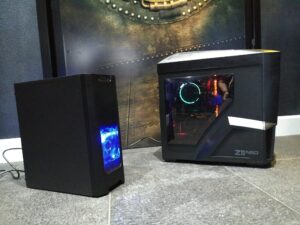 AMD was kind enough to send me two Ryzen 5s, some memory and a mother board and I figured I see how much machine I could build for cheap. I did, and this should be no surprise, find out that there really isn’t a good video card for high end games under $200 which became my most expensive part of both builds. I also confirmed that the lower priced of the two Ryzen processors works fine though I preferred the look of the fan that is coupled with the higher priced offering. This led me to conclude that my choice of processor would likely determine whether I’d use a window case and build a showcase PC or go even cheaper and go with a closed case design. Given the resulting gaming experience had more to do with what graphics card I used than any other factor the cost delta between the two systems was mostly based on appearance. But I’ll pay more for a system that looks better, I’m kind of proud of my builds, but this showcases you can build a decent little gaming desktop for not a lot of money.

It is kind of amazing how inexpensive components have become. But here were the components for the build and why.

AMD Ryzen 5 1400: This comes with the Wraith Stealth fan but given a budget system won’t have a window so paying extra for a few more GHz and a lighted fan just didn’t make sense and the cost would have been $169.

MSI B350M Gaming Pro Motherboard (Micro-ATX): This had the best match of low price and features I could find and I’ve become a big MSI fan of late. It cost a reasonable $80.

MSI Gaming Radeon RX 480 4GB Crossfire Ready Graphics card: I actually started with an NVIDIA 1050 card but the game I use to test with (because I’m addicted to it) is Ashes of the Singularity and it wouldn’t run reliably. That took me to the 1060 for $219 or the RX for $200 and price won out (plus I actually had the AMD card).

Corsair Vengeance DDR4 memory (16GB): I’ve had good luck with Corsair and it was on same for $119 and I’m a believer in memory headroom this 16GB righter than 8 but 32 is overkill.

This gave me a total system build of $711 for what turned out to be a rather decent little gaming box but what if I wanted something a tad more visual?

AMD Ryzen 5 1600: This gives you 2 more cores a little more speed and the Wrath Spire cooling fan which is lighted and better for is you want to show off and it is only $50 more at $219.

Gigabyte AB350-Gaming Motherboard 3 (ATX): More of pretty much everything and it’ll fill up a full-sized case. While I typically prefer MSI this turned out to be a nice board and it also was about $50 more or $125.

I wanted lighted memory and went with the GeIL EVO X 16 GB DIMMs at $150. So about $31 for a nicer appearance.

For storage, I went for Crucial MX300 M.2 ISSD at 500GB: It bolts to the motherboard and the price, $150, for half a terabyte seemed too good a deal to pass up. So, no cables to hide keeping the interior of the case as pristine as possible. This is my first use of M.2 for storage and I’m impressed with size, cost, and how much neater the resulting build looks.

EVGA Gold 850W Modular Power supply because I wanted some headroom (in case I wanted to drop my NVIDIA Titan card into this build), it is modular so you can leave out power cables you don’t need, and you can’t see the power supply through the window of the case so any extra bling would have been wasted. $119.

Zalman ATX Mid Tower 711 Neo Case: For the money this is one of the best looking windowed cases in the market. I’ll typically pay up to 5x this for a case for a high-end build but since we are on a budget at $55 this was way too attractive to pass up.

Now I played for a few hours on both machines using the same 4K monitor and I didn’t really notice any game play difference but I also was only running email in the background and the anti-virus built into Windows. With gaming the graphics card takes most of the load and I held it constant. Now what that $300 did buy me was about twice the storage, some extra power headroom if I wanted to upgrade the graphics card (which I eventually would), and 2 extra processor cores which I’d likely notice if I wanted to do photo editing but little else. It also got me a far cooler looking build, one I’d put out in the open, not under a desk, but also one that was far harder to move around.

Now, if you take into account it likely is better to have the headroom of the Ryzen 5 1600, the 500 GB M.2 memory, and the larger power supply then you are only talking about $100 for the bling and the difference between small and portable and big and cool. I’d probably go the big and cool route.

It is rather amazing to me how much machine you can build for not a ton of cash. Granted if I were doing this the way I normally do it I’d pay more for the case and buy a better graphics card and put in a custom water cooler but that’s because practical is not my middle name. It was also amazing just how easy building systems has become. Now most of my time is loading and updating the operating system and software all of which is downloaded and generally can happen unattended once each process is started.

Of course, now I want to take the larger system, rebuild it in a Thermaltake Tower E-ATC and add custom water cooling. I’ll bet it takes me less time to do that than it did to load all of the software. Damn this is fun, and I think I may need a less expensive hobby.

Augmented Reality is Going to Change Soon, and this is what Apple is About to Do

Hitwe Review: What you Need to Know about the New Dating Platform