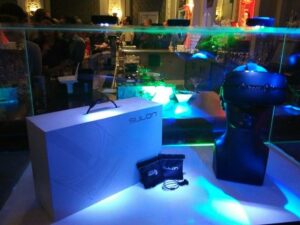 AMD is at the Game Developer’s Conference and this year they put on what was likely one of the biggest party events of the show.   It was focused on VR and they clearly plan to be a major player in this new gaming arena.   For some time AMD has been an also-ran at events like this but, this year, they clearly showcased they want to be a major player and they came out swinging for the fences yesterday.

Here are some of my impressions.

Apparently Capsaicin is one of the active ingredients in hot peppers and the theme name for the event.  Apparently they were looking for the proper balance of spicy food, booze, happiness, and productivity.  I’m pretty sure we got the food, booze, and happiness but I sure wasn’t all that productive.  It was a great party though with lots of demos and some really great games.

The most fun I had was playing with Oculus Rift.  They had an arcade first person shooter set up with the controllers where you could pick up two virtual guns and blast away at targets to your heart’s content.  There were two of us in the game and you could even take pot shots at the other guy’s head.  But it really felt like shooting in an arcade and firing away with too guns and blowing away targets just seemed so much more real than on a TV or a Monitor.  The only issue was the controllers didn’t really feel like guns and it took a little practice to get through hitting one button to pick something up and another to shoot.  Really think some kind of instrumented glove would work far better.   (This approach seems rather expensive at the moment suggesting we’ll have controllers for a while).

They had set up a station with three of the new curved FreeSync monitors in a gaming setup.  These monitors have been coming down in price and size and where once it would cost you over $3K for a setup like this you can now do it for a fraction of the price.   Particularly for driving or flying games the surround experience is pretty impressive but, long term, this is the area where I expect VR goggles will be so much better that they’ll bused instead.

They had High Dynamic Range demonstrations of both movies and games that were particularly impressive.  They had two HD TVs side by side with HDR on one but not the other.  Both TVs were HD TVs not 4K but the HDR TV looked like a 4K TV.  The colors were sharper the lines finer and the end result far more impressive with the HDR capability.   If I was buying a new TV I’d make sure it had HDR now.  They showcased both gaming and movie content and both were far better with HDR which means I’m a believer.

You got a sense that there will be new classes of games where you basically crawl inside the skin of something or someone and explore a real or imagined world.  You could be exploring real Paris or flying over the top of a post apocalyptical version of the city as an eagle.  You aren’t fighting or really interacting you are exploring like you would if you were a mouse, dog, or even zombie.   Granted you’d likely get more exercise if you walked which is why I’m looking forward to the new multi-directional treadmills.  But could you imagine going for a run through Middle Earth?  You could even be chased by Orcs which might motivate you to run faster and longer.   Or, if you are a guy, you could chase nymphs with potentially an even better result.   We’re so easy…

One of the coolest pieces of hardware was the Sulon Q wireless headset.  This competitor to Microsoft’s Hololens had a built in AMD solution to fully capture and then re-render your surroundings placing virtual content in the video feed.  The demonstration was sitting in your office and having a giant tear off the roof and lift you out of the top, you could still look down in the hole and see your real office through it.   Very impressive but it showcased just how much performance some of this stuff will require.

One this is clear we are still in the early stages of VR which is expected to really ramp up next yet.  If you want to get on the front end of this you’ll want to look for hardware badged VR Ready Premium in order to make sure it has enough performance to run a good headset.

AMD has really ramped it up this year from their CEO Lisa Su all the way through the company.  AMD is ready to VR and we should see some decent in store demonstrations by year end.  Particularly look at the Oculus rift titles like Eve as early indicators of just how far VR will go.

Turn your old laptop into a Chromebook